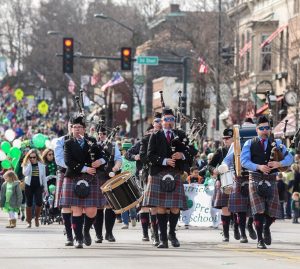 The spread of the coronavirus in northern Illinois is impacting community events, like St. Patrick’s Day festivities planned for this weekend. (Photo courtesy of St. Charles Museum)

Three St. Patrick’s Day parades planned for this weekend in Chicago and at least two in the suburbs will not go on as scheduled as the outbreak of the coronavirus shows more cases reported.

Mayor Lori Lightfoot’s office said Wednesday, March 11, Chicago’s St. Patrick’s Day Parade that was planned for Saturday, as well as the South Side Irish Parade and Northwest Irish Parade, both originally slated for Sunday,  will be rescheduled.

The traditional dyeing green of the Chicago River will also be postponed.

St. Charles in far west suburban Kane County also announced it was cancelling its parade that was scheduled for Saturday.

“We wanted to preserve this community event to continue the St. Patrick’s Parade tradition,” Sawicki stated in a news release. “We are heartbroken, but want to make sure we do our due diligence in keeping everyone safe.”

“Out of an abundance of caution” the city of Naperville announced Wednesday it is canceling the St. Patrick’s Day Parade and 5K run scheduled for this Saturday. The city said it will work with the organizers to find a possible date to hold these events in the future.

As of Wednesday morning, 19 cases were reported in Illinois, and two new cases were verified in suburban counties, Kane and McHenry.