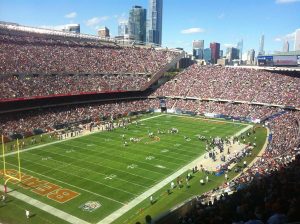 Soldier Field, home of the NFL’s Chicago Bears, would have been one of the sites for possible World Cup Games before city officials backed out of consideration late last year. (Photo by Jack McCarthy/Chronicle Media)

The world’s biggest sporting event returns to the United States in 2026, but Chicago wants nothing to do with it.

Chicago is also home base for the U.S. Soccer Federation, the sport’s national governing body.

“The guys from international soccer wanted us to underwrite their sporting event,” Chicago Mayor Rahm Emanuel said on NBC5 this week. “While I am always eager to boost tourism, I am not going to write a company a blank check that can fleece the taxpayers.”

Chicago’s absence had limited coverage in local media, but drew renewed questions and anger on Twitter, Facebook and other social media venues.

“How is hosting a World Cup game a “risk to taxpayers” when we already have the facilities and transit in place?” said one commentator.

“Why did Chicago pull out of hosting World Cup matches in 2026?” wrote another. “We host world class football friendlies every summer at Soldier Field, but decline to host the biggest soccer tournament in the world?”

The Chicago region is ranked 10th best in the U.S. for soccer fans in a study released last week by WalletHub, a personal finance website.

With arenas, ample hotel space and easy access via two airports, rail and roads, Chicago is more than capable of handling major events.

The city routinely hosts major conventions at McCormick Place, Navy Pier or smaller venues. Along with soccer friendlies involving some of the world’s top clubs, major college events make regular stops here, including college football at Soldier Field, the Big Ten basketball tournament and NCAA Division I regionals at the United Center. The NBA All-Star game is coming in 2020.

The 2026 World Cup would be the second time hosting for the U.S., first for Canada and third for Mexico. The 2018 World Cup is currently underway in Russia while the 2022 event is set for Qatar.