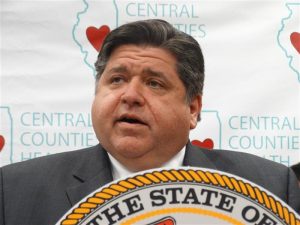 Gov. J.B. Pritzker speaks during a ceremony Friday in Springfield where he signed into law legislation capping the out-of-pocket cost of prescription insulin for many people in Illinois. During the event, Pritzker spoke about the confirmed case of novel coronavirus in Chicago, saying, “We are closely monitoring this situation and taking every precaution.” (Photo by Peter Hancock/Capitol News Illinois)

SPRINGFIELD — A Chicago resident is the second person in the United States with a confirmed case of the novel coronavirus, which originated in Wuhan, China, and has killed at least 26 people in that country and sickened more than 900 worldwide.

“At this time, the risk to the general public remains low,” Gov. J.B. Pritzker said at an unrelated news conference Friday, Jan. 24.

The individual who tested positive for the virus is a Chicago woman who recently returned from Wuhan. Pritzker said the number of people she came into contact with since returning to the U.S. is “small.”

“We are closely monitoring this situation and taking every precaution,” he said, adding that state and city health and aviation departments are working with the federal Centers for Disease Control and Prevention on the issue.

He said the public should take the same precautions as in the flu season — that is, washing hands and visiting a doctor if symptoms show.

Illinois Department of Public Health Director Dr. Ngozi Ezike said while the virus bears the same name as known viruses, this strain is different than those that are known.

The CDC said in a news release coronaviruses are “a large family of viruses, some causing respiratory illness in people and others circulating among animals including camels, cats and bats.”

Ezike said CDC officials had arrived in Chicago on Friday afternoon and others were on the way.

She said the Chicago woman was not symptomatic during her travels from Wuhan when she returned on Jan. 13, but started experiencing them in “the following days.”

The patient is stable and hospitalized, she said. Authorities are working with the hospital to identify any other people who may need to be assessed for possible exposure.

“Health officials in Illinois are looking retrospectively to identify other individuals who have symptoms of coronavirus who may have traveled from Wuhan before the heightened airport screenings and before the case was confirmed in the U.S.,” Ezike said.

According to the CDC, there are 63 cases being monitored across the country. The other confirmed U.S. case was in Washington State.

Chicago O’Hare airport is currently screening passengers as they arrive from China.

The CDC recommends travelers avoid all nonessential travel to Wuhan and encourages those making the trip to practice safe hand hygiene and avoid any people experiencing illness.