The first ever Wrigleyville Christkindlmarket keepsake mug has launched and it’s a boot, to boot.

“We’re excited about the boot coming back,” said Beth Cheverud of Chicago, who held her white boot-shaped mug with Wrigley Field artwork on opening weekend of the Wrigleyville Christkindlmarket.
“Keeps my hand warm,” said her husband Bryan Cheverud with a smile about his cup of comfort.

The white boot keepsake mug with the Clark and Addison sign on it is meant to hold piping hot gluhwein spiced wine, hot chocolate, hot cider or hot tea. 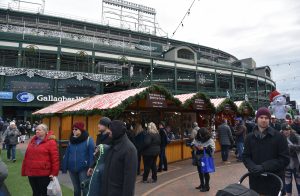 It’s also meant to hold holiday memories for folks collecting the mugs, or for those simply coveting this year’s model.

There is also a penguin mug appealing to the kiddies of the Christkindlmarket Kinder Club.

Christkindlmarket Wrigleyville has returned for a second time to Winterland at Wrigley Field.

Expect to see an ice skating rink while experiencing the aroma of sauerkraut and holiday spice.

“We’re having a lot of fun, we’re glad that they put this on,” said Brian Flueckiger of Wrigleyville, who accompanied his daughter Sophia Flueckiger, 6, a first-grader, on the ice rink on Nov. 23.

The Flueckiger family is a Chicago Cubs family.

“We cheer for the Cubs,” Brian Flueckiger said.
The Wrigleyville Christkindlmarket opened at Gallagher Way on Nov. 22 and continues daily through New Year’s Eve, Dec. 31. 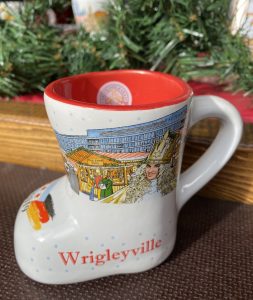 Photo opportunities are plentiful. But for the keepsake Wrigleyville boot mugs, however, get them while they’re hot, Bleeker said, because they’re poised to be sell outs.

Abby Zureich of Lincoln Park attended with her nephew Henry Zureich of Western Springs and the tot’s parents Mike and Molly Zureich.

“We’re having a lot of fun,” Molly Zureich said.
“This is his first time to any market like this,” said Henry’s father.

“We used to live just down the street before we left for the suburbs.

“So, we showed him the old neighborhood,” Mike Zureich added, referring to Henry.

On opening weekend, business was good, said vendor Katharina Ortner from a town in the middle of Austria in the Alps.

“I really like the market because so many families and children are here,” Ortner said.

Ortner was asked if she was a Chicago Cubs fan.

“Is there a game today?” she said.

“I’m not against the Cubs because it’s ice hockey, right?”

Then came the reveal.

“Well, I have nothing against baseball,” she said, continuing to laugh.

Since 1996, German American Events, LLC, a subsidiary of the German American Chamber of Commerce of the Midwest, has hosted the Christkindlmarket Chicago as a free event, featuring international and local vendors. 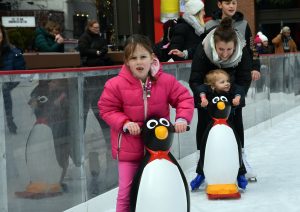 Sophia Flueckiger, 6, a first-grader of Wrigleyville, skates on the rink, using a penguin skating helper at Christkindlmarket Wrigley in Chicago on Nov. 23. (Photo by Karie Angell Luc/for Chronicle Media)

Christkindlmarket Chicago celebrates its 24th year this year and is located at Daley Plaza.