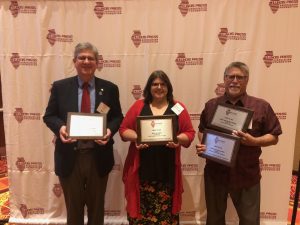 The awards were announced at the annual convention in Bloomington-Normal on Friday, June 8.

Cook County Chronicle earned two first-place awards in Division B. It won for Best Website and Joseph Daniszewski won for best Informational Graphic for its How They Voted page.

Of the website, judges said that the site is “very comprehensive and easy to navigate.”

Judges said of the Informational Graphic, “An easy-to-read and educational graphic to tell how Senators and Congressmen voted. This one is first place because it was so user-friendly. Well done!”

The staff of the Peoria County Chronicle won in Class A of the News Reporting — Series category for its coverage of the layoffs and closing of Caterpillar plants. Judges said “Fully developed stories with multiple angles and techniques including pull quotes and timeline. Very nicely put together.”

Editor Jack McCarthy won in Class A of the General Excellence category for the Winnebago Chronicle. Judges said, “Lots of great photos. I really like the layout of both editions. This is a good-looking community newspaper.”

Holly Eitenmiller earned a second-place award in Class A of the News Reporting — Series category for the Tazewell Chronicle with her coverage of the disappearance and death of Robert Bee. “Excellent storytelling, well-written, tight,” said judges.