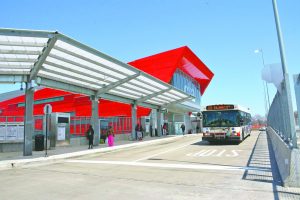 “(This) represents an important step toward working directly with Chicago’s communities to spark development that will provide more places to live, work and shop — all within walking distance of a world-class transportation hub,” said Samir Mayekar, deputy mayor for neighborhood & economic development. “By driving development that is truly inclusive and making the needed investments in our communities, we can build a Chicago that is stronger, fairer and more prosperous than we found it.”

As part of the initiative, the CTA has engaged the Metropolitan Planning Commission to begin exploring concepts for Transit-Oriented Development on eight vacant parcels along State Street north of 95th Street that were acquired as part of the $280 million reconstruction of the 95th Street terminal.

“The new 95th Street station was conceived not only as an important transit hub, but also as a new landmark and anchor for the community,” said CTA President Dorval R. Carter, Jr. “This station can be a catalyst for neighborhood improvements, and this TOD process will ensure that the community has an important say in the outcome.”

In partnership with MPC, a community-driven process, called a Corridor Development Initiative, will seek community input on possible development. Following the CDI process, CTA will develop a request for proposals from potential developers, reflecting the outcomes of the planning process, including community desires and feasible concepts.

”The Metropolitan Planning Council is thrilled to partner with CTA on a community-centered planning process at 95th and State streets,” said Kendra Freeman, director of community development and engagement at MPC. “Large-scale transit improvements can anchor future investments and invite new development. The 95th Street Red Line station has long been a gateway to the Far South Side, and the surrounding 95th Street corridor boasts incredible assets including Chicago State University, the Woodsen Regional Library, faith-based partners and engaged constituents. Better understanding community members’ priorities ensures that the future of this block-long parcel truly serves people’s needs and desires, enriching this long-neglected thoroughfare.”

“Investing in our public transportation system goes hand in hand with creating jobs and revitalizing commercial corridors — you can’t talk about one without the other,” said Alderman Howard Brookins Jr., chairman of the Chicago City Council’s Transportation and Public Way Committee. “I look forward to working with Mayor Lightfoot, the Metropolitan Planning Commission and the entire community on finding the best way to develop this area for our families and create opportunities for our residents.”

The Metropolitan Planning Commission is a planning and policy organization founded in 1934. MPC’s CDI is a three-part planning process aimed at helping residents understand issues—such as the true cost of development—while creating a set of priorities to guide community leaders as they plan for development in their neighborhoods. Integral to the CDI is the hands-on opportunity for residents to “build” what they would like to see and test whether their projects are financially feasible.