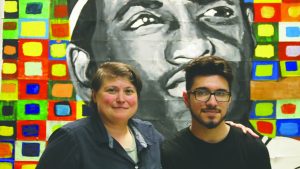 Luis Hernandez is the “nice quiet kid” at Chicago’s Clemente Academy who is involved in a ton of activities and is hard to stop once he sets his mind to something.

He has been a fixture on the school soccer team playing all four years of his high school career and serving as team captain his junior and senior years.

He has been involved in activities with a local Boys and Girls Club and led fundraising efforts at the school for a student in Africa to get a prosthetic leg.

Leading the Funky Sock Fest at Clemente, Hernandez was part of a crew that encouraged students at the school to sell packs of socks, with a purpose.

“If we sold enough, it would mean a prosthetic leg,” Hernandez said.

He was excited to hear that the Clemente fund-raising effort hit its goal and that a student in Africa would soon have the ability to walk to school.

Hernandez has also been part of activities like the school’s participation in Peace Day activities in Downtown Chicago last fall.

He even led the Clemente Academy Baccalaureate Diploma Program in push-ups during a program gathering in Denver his sophomore year.

Andrea Kulis, coordinator of the Baccalaureate Diploma Program at Clemente, was in need of someone to step up for the push-up competition as part of program activities during a Colorado conference two years ago.

Hernandez not only provided a strong showing for Clemente, he captured top honors in the competition. He credited his daily routine of doing push-ups with giving him the strength and his physical fitness training from soccer in giving him the endurance to complete the task.

His dogged determination also gave him the focus enough to complete the task. There is little Hernandez cannot do, if he sets his mind to it, according to instructors at Clemente.

He taught himself the Mario Bros. theme song on the guitar simply because he thought the song was cool and wanted to learn it.

Hernandez will attend the University of Illinois in the fall, possibly studying biomolecular engineering or possibly with sights on becoming a cardiologist because when he was in seventh grade, his sister was diagnosed with a rapid heart rate.

“I want to help people either chemically or physically,” Hernandez said. “It’s something I’ve always done. It’s kind of a passion, to be honest. I’ve just always wanted to be able to help my friends, anyone in need who has a question. I will go as far as I can. I will work twice as hard as I need to in order to help them.

“I don’t like seeing them fail in anything. I would prefer to see them succeed. Why? Because I succeed, it is something I strive to do. My parents have always told me, ‘Luis, work hard in school so you don’t have to work as hard as us right now.’”

Hernandez said any task he takes on, he makes sure to work hard enough to master the skill and pass those skills on to the next person.

He said he wanted to stay in state to go to school, not wanting to be that far from home in case of emergency.

Whatever the task, Hernandez said he always wants to provide a quality effort.

“I am always going to do the best that I can no matter what I am doing,” the Clemente student said.