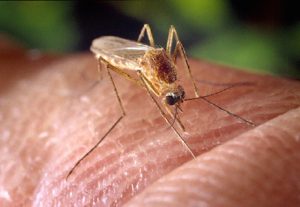 We are entering the prime infection season for the mosquito Culex pipiens that carries the West Nile virus. That virus has sickened 2,200 people and killed 140 in Illinois alone the past 15 years.

The Zika virus has dominated the headlines in recent weeks, causing fear from South America to Florida, and even leading some athletes to skip the Rio Olympics.

But the mosquito that carries Zika virus, Aedes aegypti, is rarely found in Illinois. For people here, it’s important to note that we are entering the prime infection season for another mosquito — Culex pipiens — that carries the West Nile virus. That virus has sickened 2,200 people and killed 140 in Illinois alone the past 15 years.

I was one of them. This Labor Day weekend I will observe, with a grateful shudder, the 10th anniversary of my own battle with West Nile encephalitis.

Actually, that’s an overstatement. There is no “battling” the effects of a neuroinvasive West Nile infection; just enduring it.

According to the Illinois Department of Public Health (IDPH), West Nile virus, which was first found in New York in 1999, was identified in Illinois in September 2001 in two dead crows found in the Chicago area.

In 2002, the number of West Nile cases exploded, with 100 of the state’s 102 counties reporting at least one positive human, bird, mosquito or horse infection. Illinois had 884 human cases and 64 deaths, more than any other state in the nation.

Since that epidemic, the IDPH has aggressively monitored and attacked the mosquito population. Over time the rates of infection have ebbed and flowed.

Between 2008 and 2011, instances of infection were relatively low, with only eight deaths recorded among 166 confirmed cases.

Things have been quiet so far in 2016, with just four people symptomatic. But it’s still early. Mid-August to late September and even early October, when colder weather kills the mosquitoes, is prime West Nile infection season.

The virus is out there: as of August 12, a total of 933 batches of mosquitoes have tested positive for West Nile in Illinois.

West Nile symptoms usually occur five to 15 days after the bite of an infected mosquito. Most people bitten by Culex pipiens mosquitoes — approximately 80 percent — will suffer no symptoms. And most everyone else will experience milder symptoms ranging from fever, headache, and body aches, nausea, vomiting, and sometimes swollen lymph glands or a skin rash. The IDPH says symptoms can persist for a few days to several weeks.

Suffering through West Nile encephalitis is an experience I won’t ever forget.

Over the 2006 Labor Day weekend, I was healthy and strong, busy building a cedar fence in my back yard, hauling bags of concrete and cedar posts and digging postholes.

Three days later, on Thursday, Sept. 7, I was so desperately sick from encephalitis I couldn’t stick my finger out from under a pile of blankets without violent chills.

Just two weeks earlier, the newspaper I wrote for had run a story about an Oak Park woman becoming seriously ill with West Nile. But despite not feeling well that morning, with weakness, low energy and irritating occasional chills, I thought I just had a summer cold. Serious illness? That was for other people.

That evening, as I lay on the couch talking with my mom on the phone, the symptoms suddenly welled up. It was all I could do to drag myself to bed, where I would remain until Monday morning, sweating, chilled, with a 102.5-degree fever.

Friday my doctor phoned in a prescription for antibiotics to fight my supposed sinus infection. When I was finally able to see the doctor on Monday, the sinus symptoms were gone, but the fever and fatigue were in full bloom.

As were the hallucinations. At least a dozen times that weekend, I awoke with my hands out in front of me, busily scribbling notes on some subject, until I realized I had no pen in my hand.

At other times, I awoke babbling about one thing or another, with all the coherence of Donald Trump discussing foreign policy. One night I jumped out of bed in the middle of the night and loudly questioned my wife as to the whereabouts of the electrical connections for the overhead lighting.

Carol talked me back under the covers, where I immediately resumed my sweats and chills.

My favorite memory (as in, “Oh those funny, funny times lying delirious in bed with multiple layers of increasingly ill-smelling sweat-soaked pajamas”) was stumbling weakly out of bed to hazard a trip to the bathroom.

Carol walked past, chuckled, and said, “Don’t do anything to your hair — just go take a look in the mirror.” Staring back at me was a chalky-faced ghost with hair stuck straight up in front, just like Martin Short’s Ed Grimley character, only on sedatives, with a far less intelligent look in his eyes.

You take comic relief where you can find it when dealing with West Nile virus, folks.

I was so out of it Sunday afternoon that I slept from around 2:30 to 5 p.m. When I awoke, all I had to do was reach over to the nightstand for the remote to turn on the Bears-Packer game. Somehow, despite thinking about it several times, I never did.

Monday evening I suddenly felt better — for about all of three hours. That night, though, as the fever faded the headache persisted, and I was beset by weird burning, aching pains from my lower back to my ankles. For the next 24 hours, fitfully drifting in and out of sleep, I stretched constantly in a futile effort to alleviate the pain.

Then it broke, and I was left with a more or less tolerable bag of symptoms that include a milder headache, an inability to keep my hands and feet warm and serious fatigue.

My doctor initially prescribed antibiotics, based on my symptoms. A follow-up blood test took a week to come back.

One of the oddities of contracting the West Nile virus is that once it’s diagnosed, there’s little doctors can do for you, except tell you to rest, eat healthy foods and drink plenty of liquids. Basically all Western medicine can offer is “supportive treatment.”

After the most severe symptoms passed within a week, I took another week to rest and recover, then worked half days for another two weeks.

I wasn’t myself for several more months, with frequent fatigue and a sense of floating and disconnectedness when I moved about.

There have been lingering effects. Once a night owl, I have since experienced fatigue and loss of mental acuity whenever I stay up too late. And I am still prone to severe, shaking chills that cut through me when the mercury drops below freezing.

Still, I consider myself lucky. At 54, I was in a higher-risk group for serious complications from the disease. I shudder to think of the toll it would take on me now at 64.

My advice to those who haven’t had West Nile is simple. Don’t get it. Listen to the experts and follow their advice.

The full list of proactive steps you can take is available at:

— Up close and personal with the West Nile virus  —