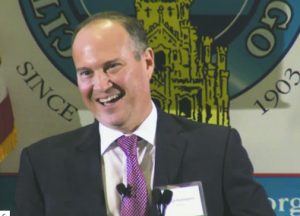 Joe Dominguez, CEO of ComEd, shares a laugh during his April 8 presentation before the City Club of Chicago. He said the shift to electric power would put about 100 different models of electric vehicles on the street by 2022. (City Club photo)

Illinois will be booming with solar power and electric vehicles in the not too distant future, according to the CEO of the state’s biggest power company.

“There’s about to be an explosion of solar energy in the region,” according to Joe Dominguez, CEO of ComEd, which provides electricity to 70 percent of the state’s homes. “We have applications out there for these what we call community solar farms — where members of the community can sign up for a share of the solar farm and get some of the benefits. We have space for, let’s call it 60, 70 in this first tranche. We’ve got well over a thousand applications for them. So it’s moving incredibly quickly.”

Speaking April 8 before the City Club of Chicago, Dominguez said that with the growth in solar power, ComEd will be having “prosumers,” individuals who provide electricity to the company at times and who consume power from the company at other times.

He said the electric power system was originally designed around big facilities creating power and pushing it out to customers. Increasingly, he said, people are generating power from their rooftops and providing excess energy back to ComEd.

“Consumers will sell output back to the grid during the day when they have more energy than they need and then in the evening, they’ll consume energy when the solar panels are not working,” Dominguez said.

Being able to harness all that energy and provide it back to consumers when they need it is one of the challenges the company is dealing with, he added.

He noted that 85 percent of wind energy is produced at times that are not peak energy use times.

The ComEd CEO said that electric vehicles are another trend the power company continues to prepare for rapidly.

Dominguez said for the first quarter of 2019, the electric Tesla Model 3 was at the top of the luxury sedan market by such a wide margin that the Nos. 2, 3 and 4 companies combined did not equal the Tesla sales numbers.

A lot of the major car companies, he said, have already announced that they are going electric with their new models “and not using the internal combustion engine.”

“By 2023, electric vehicles are going to be a very challenging competitor,” Dominguez said.

“Electrification of the transportation sector” as Dominguez put it will increase the load for power by 50 to 100 percent.

“Frankly, we’re not going to win the fight against climate change, the fight against anything else, if the only people owning electric vehicles or rooftop solar are rich people in the suburbs,” Dominguez said. “It’s just not going to work. We’ve got to figure out a way to create social equity by ensuring the jobs that spring from this amazing transformation are felt where those jobs are needed most.”