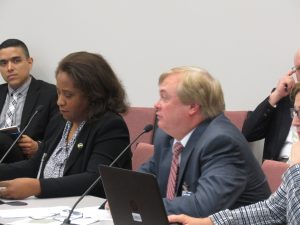 Terrence R, Donnelly (center), executive vice president and chief operating officer for ComEd, and Michelle Blaise, senior vice president of technical services for ComEd, tell members of the Illinois Commerce Commission that the utility is ready for summer power needs and to respond to power outages due to storms. (Photo by Kevin Beese/for Chronicle Media)

Feel free to set that air conditioner a degree or two colder to cool off this summer. If your wallet can take it, so can the electricity grid.

Both ComEd and the regional transmission organization that provides it with additional power when needed, say they foresee no problems with meeting summer electricity demand. Even with a forecast of warmer-than-normal summer temperatures, ComEd and PJM Interconnection, its RTO provider, say they have ample extra power to draw from when needed.

The expected warmer-than-normal temperatures could cause volatile weather that increases power outages, but ComEd says it can handle that as well. ComEd is conducting 63 emergency preparedness operational exercises in 2016, a 16 percent increase in drills from last year.

He said it is estimated that nearly 1 million people were spared power interruptions due to equipment improvements ComEd made during 2015.

ComEd continues to work to take safety precautions for workers and the public, Donnelly said.

“Safety is our No. 1 priority for our workers and the people who rely on us for service,” Donnelly said. “We are not just one of the safest electricity providers. We are one of America’s safest companies.”

Donnelly said the electricity company has made 300 improvements to its storm response effort – everything from providing faster texts and social media posts about outages to sending Community Care crews with phone chargers and water to areas hit with extended outages.

He said an increased social media presence is important for the company and customers.

“People want to know what is happening,” Donnelly said.

He added that more than 150,000 customers have signed up for the Peak Time Savings Program, cutting their electricity use during peak hours. That tripling of customers in the program frees up available kilowatts during high-demand times, Donnelly noted.

ComEd officials think the peak load for electricity could hit an all-time high this summer. The “worst-case” expected peak load for this summer is 24,083 megawatts. ComEd’s all-time system peak was 23,753 megawatts in 2011. ComEd reps said that even hitting the worst-case scenario point this summer would only have the power company at the 90th percentile and not overtaxing its systems.

Michelle Blaise, senior vice president of technical services for ComEd, said part of improving information-sharing with customers is getting better information from the company’s front-line personnel.

“We have made investments to improve accountability estimates and improve our response at the scene of outages,” Blaise said.

PJM Interconnection, which serves as a regional transmission organization in 13 states, including Illinois where it provides back-up support for ComEd, expects to be able to handle any surge in electricity needs for the region.

Richard Mathias, senior consultant for PJM and former chairman of the ICC, noted what a huge electricity provider ComEd is. He noted that ComEd averages using 20-25 megawatts of power while PJM’s entire 13-state area uses 165 megawatts of electricity.

Mathias said that natural gas has increasingly been used in the creation of electricity, going from 5 percent of PJM’s electricity in 2005 to 20 percent in 2015.

Coal has done the opposite becoming less of source of electricity during the last 10 years and almost non-existent in the future, Mathias said.

Mathias said the biggest users of electricity have also changed over the years.

“We don’t have the steel mills anyone, but now we have data centers and they have a huge need for electricity,” Mathias said.

John Rosales, a commissioner of the ICC, noted that Illinois utilities have made efforts “to modernize and strengthen the grid … intended to improve system reliability, thereby helping Illinois customers experience less outages, and improving power restoration.”