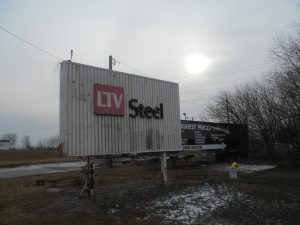 The LTV Steel sign is the one of the few remnants of the Republic Steel mill that used to tower over the blocks between 116th and 122nd streets. (Photo by Igor Studenkov/for Chronicle Media)

A new industrial complex is coming to the southeastern end of Chicago — and a coalition of local community groups is working to ensure residents of the surrounding neighborhood benefit.

On Feb. 7, the Riverside, Mo.-based NorthPoint Development broke ground on the project that would bring new life to what was previously the site of Republic Steel mill. Plans call for a total of six buildings that would collectively span 2.3 million square feet. The complex would be able to host up to 10 companies, creating estimated 660 permanent jobs.

Coalition for a Southworks CBA and Alliance of the Southeast community organizations have been meeting with NorthPoint to develop a community benefits agreement. Amalia NietoGomez, ASE’s executive director, told the Chronicle that they wanted to try to ensure two things — that residents have opportunities to apply for both construction and permanent jobs, and that the new complex is as environmentally friendly as possible. At this point, the negotiations are still in the early stages, but the collation said that the fact that NorthPoint was willing to negotiate with them was an encouraging sign — and they hope that the end results will benefit the region.

The Republic Steel mill occupied most of the area bound up 117th Street in the north, Avenue O in the east, 122nd Street in the south and Norfolk Southern freight train tracks on the west. It was just one of the many steel mills found in Hegewisch, East Side and South Deering — working-class neighborhoods in the southeastern end of Chicago, north and east of Lake Calumet. They were major parts of the region’s economy. According to the Encyclopedia of Chicago, as late as 1970s, Republic Steel employed approximately 5,000 people throughout Chicago area. But by the early 1980s, less expensive imported steel hurt all steel companies’ profits. Republic Steel was acquired by Texas-based steel conglomerate LTV Corp. in 1984. After several bankruptcies, the Hegewisch plant closed in 2001, The land has been vacant ever since. 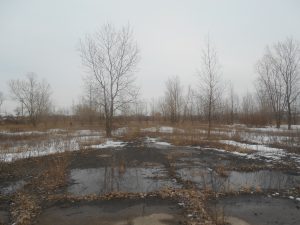 One of the major reasons why many former steel plant sites remain vacant is decades of soil contamination. Environmental remediation is expensive, and many redevelopment plans fell apart because developers didn’t want to take on those costs. This has been most vividly illustrated by former Southworks U.S. Steel plant in the neighboring South Chicago neighborhood, where several plans to redevelop a Loop-sized piece of land were proposed, only for the developers to pull out.

NorthPoint Development announced the plan in early July 2018. The company is no stranger to Hegewisch — according to its website, it redeveloped the Ford supply campus at the neighborhood’s southwestern end and several parcels farther north and west of the Republic Steel site.

The plan calls for a total of six buildings. The first building, which will be 360,000 square feet, will be built near the corner of 122nd Street and Burley Avenue. The remaining five would “range from 215,000 to 600,000 square feet.” They will be able to accommodate up to 10 tenant businesses, with facilities suited for manufacturing, assembly, and distribution. Many details wouldn’t be settled until the tenants are secured.

According to the City of Chicago press release, the project will cost $164 million to build. $52 million, or about a third of the overall cost, will come from a Tax Increment Financing District that was created last year to support this development and any other developments that may open nearby.

When a TIF district is created, the amount of money that taxing bodies collect is frozen. Any extra money that would normally go to the taxing bodies instead get deposited into a TIF fund. The maximum length of the TIF is 23 years.

The 116th/Avenue O TIF district is bounded by 114th Street on the north, 122nd Street on the south, Avenue O on the east and the Calumet River on the west.

Because the TIF is less than a year old, it is not currently clear how much extra money it will actually accumulate. But the city can “port” funds from nearby TIFs — in this case, Lake Calumet TIF District. And, on the long run, given that most of the land within the TIF is vacant, any development would increase property tax revenue.

Whatever the case may be, the city press release indicates that $52 million would be used for “environmental remediation, roadway improvements, infrastructure upgrades and other eligible project costs.” The roadway improvement piece will be an important component. Burley Avenue has seen considerable wear and tear, with cracks and potholes abounding.

The Chicago Sun-Times previously reported that NorthPoint founder and CEO Nathaniel Hagedorn described the site as “challenging” in terms of soil contamination, other environmental issues and the state of infrastructure. He told the newspaper that it would take “a public-private partnership” to revitalize the site.

During the Feb. 7 groundbreaking, Ald. Sue Sandowski Garza (10th Ward), whose ward includes Lake Calumet, the neighborhoods east of it and portions of South Chicago, said that she was pleased that the city was investing in the region.

“I look forward to the facility’s ability to generate new jobs and am confident that this community anchor will provide continued economic growth for years to come,” she said.

Hagedorn didn’t mention the challenges, saying simply that his company was glad to be investing in the region.

“NorthPoint is bullish on the 10th Ward, the City of Chicago, and the State of Illinois,” he said. “We are excited about what is happening here, and we appreciate the opportunity to be part of it.” 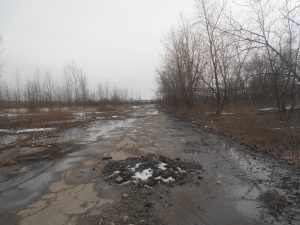 The current state of the section of Burley Avenue that runs from what used to be Republic Steel mill. (Photo by Igor Studenkov/for Chronicle Media)

“[We are talking] about the agreement to do basically three things,” NietoGomez said. “One is to develop a job preparation pipeline, especially focusing on hiring local residents during construction phase and also after. And then the second thing is ensuring environmental sustainability of the development.”

In terms of jobs, NietoGomez explained, their first priority is to make sure that area residents would have an opportunity to get construction jobs. She elaborated that, for the purpose of the community benefits agreement, that would include residents in the 10th Ward, as well as the remaining portions of South Chicago and the South Side neighborhoods north and west of the lake. That includes Pullman, West Pullman, South Shore, Avalon Park and Calumet Heights. NietoGomez said that they would push NorthPoint to help set up training programs to teach interested local residents the skills they would actually need to work construction.

When asked about the permanent jobs, NietoGomez noted that, the tenants haven’t been secured yet. But they hoped to work with NorthPoint to develop training programs that would help residents qualify for whatever job opportunities will open up once the tenants move in.

When it comes to the environment, the community groups want more than environmental remediation. NietoGomez noted that there have been growing concerns about pollution in the southeastern neighborhoods, and they wanted to minimize the pollution coming from the industrial park.

“[We are in the process of talking about] supporting green jobs and just [addressing] things like truck traffic, that there’s a traffic plan, especially whatever potential increase in truck traffic,” NietoGomez said. “It would most likely be diesel truck traffic, and we would like to limit the amount of diesel in the air.”

They were talking with NorthPoint about making sure the buildings themselves are environmentally friendly.

“I know that NorthPoint is looking to comply and exceed Chicago sustainability guidelines,” NietoGomez said, adding that they are hoping that the developer will go for the Leadership in Energy and Environmental Design certification.

With the negotiations just starting, NietoGomez said it was too early to judge how receptive NorthPoint actually is, and how willing it would be to actually agree to something. But for now, the coalition is optimistic.

“I think the good part is they’re sitting down to meet with us, so we’re excited,” NietoGomez said. “It’s a bit early to tell, but I can say that we’re looking toward to working with NorthPoint [so] that we get the agreement that’s beneficial to the community.”