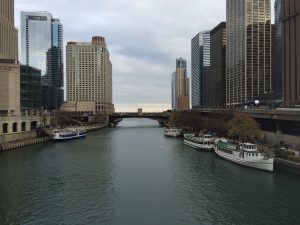 “Gutting the U.S. EPA and programs to protect the Great Lakes would roll back decades of hard work to restore and protect our freshwater resources,” said Alliance for the Great Lakes spokeswoman Jennifer Caddick. (Chronicle Media photo)

This set off alarms at the Chicago-based Alliance for the Great Lakes March 13, where a press conference was called at the Chicago offices of the Sierra Club.

“Gutting the U.S. EPA and programs to protect the Great Lakes would roll back decades of hard work to restore and protect our freshwater resources,” said spokeswoman Jennifer Caddick.

In Illinois, the Great Lakes Restoration Initiative funds projects such as wetland restoration near the Indiana Dunes. The EPA’s Great Lakes work has been instrumental in keeping out invasive species such as Asian carp and freshwater mussels from Lake Michigan. Near Chicago, projects funded by the GLRI have cleaned up the Des Plaines, Chicago and Calumet Rivers. The Great Lakes Alliance hosts “Adopt a Beach” cleanups throughout the year.

“These cuts would decimate everything we’re doing to try and protect Lake Michigan and the rest of the Great Lakes from pollution, from invasive species, from climate change,” said Jack Darin, head of the Illinois Sierra Club in an interview. “When you cut the Great Lakes, you cut jobs, you cut our health, you cut the future of a tremendous asset for our whole region.”

“Lake Michigan is our Yellowstone. That is our Grand Canyon,” Emanuel said. “We have to treat it with that same type of respect and investment in the future. It’s not just something that’s beautiful to look at. It’s the lifeblood of our city.”

Emanuel said clean water was a nonpartisan issue and he thought both Democrats and Republicans would push back on the suggested budget cuts.

“We have seen the tragedy and heartbreak that occurs when our nation’s clean water programs fail,” Caddick said.

“Memories are short. But it was not so long ago that our country united for change, shocked by images of a river on fire. Federal laws are the cornerstone of bringing clean water to people, and they only work when enforced.”