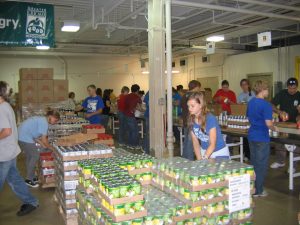 The Greater Chicago Food Depository is the food bank for Cook County. Through its network of 650 food pantries, soup kitchens and shelters, the depository this year served 812,000 people or 232,100 households. (Chicago Food Bank photo)

“Enjoying life to the fullest” is the top resolution for the new year, according to a Nielsen survey.

Other resolutions involve personal improvements of some sort, such as get healthy, lose weight etc.

Helping others did not make the top 10 resolutions, though there are plenty of Americans who need help.

The anti-hunger group, Feed America, states that 43.1 million Americans (13.5 percent of the population) live in poverty. This includes 14.5 million children (20 percent) under the age of 18. And 42.2 million

Food insecurity is the term used to describe circumstances that prevent people from knowing when they next will eat.

The Greater Chicago Food Depository is the food bank for Cook County.

Through its network of 650 food pantries, soup kitchens and shelters, the depository this year served 812,000 people or 232,100 households.

The depository distributes 160,000 meals a day.

The nonprofit organization began in 1979. And last year, it distributed 70 million pounds of food, 35 percent of which was fresh produce.

The Greater Chicago Food Depository relies heavily on donations and volunteers. Food is donated, purchased or gotten from the Emergency Food Assistance  Program of the U.S. Department of Agriculture.

Donations come from individuals, businesses and community groups. Each dollar donated to the food depository buys more than a dollar’s worth of food because the depository buys in bulk. Food donations also are gratefully accepted.

If helping others is on your list of new year’s resolutions, the food depository welcomes volunteers for such activities as:

The depository also can provide contact information to food pantries in specific neighborhoods or suburbs to persons interested in volunteering locally.

The depository has programs geared to Cook County residents of all ages and circumstances — children, the elderly, veterans, the home-bound.

Earlier this year, the depository partnered with Cook County government to create the Cook County Food Access Plan, the goals of which are:

— Consider helping others as No. 1 New Year’s resolution —