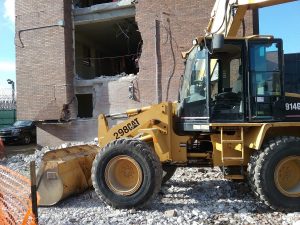 Three shuttered buildings at Cook County Jail will be demolished in Cook County in 2017 and 2018, saving $118 million over 10 years of upkeep costs, said Sheriff Tom Dart in November.

From raising the minimum wage and guaranteeing sick leave for low-income workers, to raising sales tax on sugary soft-drinks, the Cook County Board made significant moves in 2016. The county also moved forward with two vacant county-owned properties, taking steps to historically renovate the old Cook County Hospital and to demolish three division buildings on the Cook County Jail campus. The year 2017 may see drastic changes in the cash-bail system in Cook County that could reduce prison populations statewide.

In Chicago, small business owners and companies that employ low-wage workers complained about the economic strain the increase could put on their businesses. But proponents for the increase say raising the wages of the bottom workers is a direct boost to the economy and allows employees to afford higher rents and costs.

In Seattle, one year out was too soon to determine, said economists after minimum wage was increased in 2015 from $9 to $10 or $13 per hour, depending on the number of company employees. However, the city did not report large numbers of low-skilled workers losing their jobs, nor small businesses closing at an increased rate.

The County also approved protecting minimum sick-time for low-wage employees, in a move that similarly echoed the Chicago City Council. Employees in suburban Cook earn one hour of sick time for every 40 hours worked. The new law also goes into effect July 1. 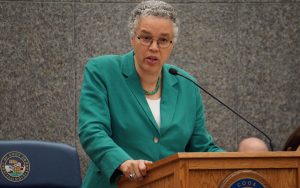 In June, the Cook County Board approved a penny-on-the-dollar sales tax on retail purchases in 2016. In 2010, the board revoked a half-penny county sales tax installed by Preckwinkle’s predecessor John Stroger Sr. Retail purchases within Cook County went up to 10 cents on the dollar. The tax hike was designated for county pensions, the board said.

Then, in November, the board approved a soda-pop 1 cent per ounce tax in a rare tie vote, that Preckwinkle herself had to vote to break. The tax is expected to bring in $224 million per year. The extra tax will up the price of a six-pack of soda by 72 cents and tag 68 cents onto a 2 liter bottle. 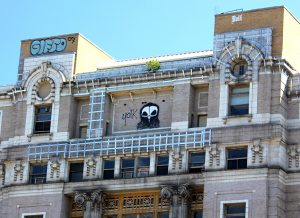 After looming vacant along the I-290 Expressway for more than a decade, the old Cook County Hospital at 1835 W. Harrison St. will undergo a $600 million privately financed restoration in 2017. MB Real Estate was chosen in April by the county board to create a hotel, private residences and retail shops in the 102-year-old Beaux Arts-era building. In addition, the company will pay $2 million per year rent in a 99-year lease.

“This project creates and fosters true urban transformation in the heart of our county,” said Cook County Board President Toni Preckwinkle in a statement. “New residential, retail, office and hotel construction will create a vibrant mixed-use community enhancing the adjacent Illinois Medical District and Chicago’s near West Side.”

The building’s restoration was championed by Landmark Illinois, which lobbied the county board for years to save the building’s terra cotta fluted façade.

A makeover of the façade will be the first part of the project. Currently, the terra cotta surface is tagged with graffiti and shored up with construction braces to keep pieces from falling off the 1914 building,

“We are ecstatic that the county’s leadership has found a viable means to save the historic building and at the same time inspire a transformational redevelopment for the city’s near West Side,” said Bonnie McDonald, president in a statement.

According to the county, the plan calls for a 125-room extended stay hotel that will likely serve visiting professors and doctors. The formerly majestic two-story entrance lobby will be restored and likely be flanked with shops. The final plan also calls for about 150 residential units, some reserved for “affordable housing,” according to the county’s statements about the project.

The restoration is part of a 10-year plan to redevelop the 16-acre “Illinois Medical District” area which includes the University of Illinois-Chicago Medical Center, the new Rush University Medical Center and the John R. Stroger Hospital, which replaced Cook County as the site for healthcare for the county’s poor.

“[The old hospital] has been an albatross for us and for the Illinois Medical District,” Preckwinkle said in an interview. “We have a derelict building right there in the center of things.”

The county also issued $118 million in bonds in 2016 for a $108 million addition to the Stroger Hospital that would house new administrative offices and a clinic. 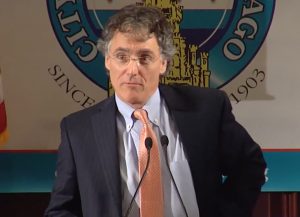 Three shuttered buildings at Cook County Jail will be demolished in Cook County in 2017 and 2018, saving $118 million over 10 years of upkeep costs, said Sheriff Tom Dart in November. The county will raze divisions 1, 3 and 17 at 2700 S. California Ave.

The jail population has declined by 20 percent since 2010, which County Board President Toni Preckwinkle took office.

“Bringing down the jail population is allowing us to bring down buildings and bring down costs. As we see declines in the number of detainees, it is logical and fiscally responsible to reduce the number of divisions at the jail,” Preckwinkle said. The county said razing the first two buildings, totaling 135,000 square feet of space would save $3 million in one year alone.

The significance of bulldozers dismantling the site was not lost on Cook County Commissioner Stanley Moore, chairman of the County Board’s Law Enforcement Committee.

“This is a visual representation of the achievement of the population reduction at Cook County (Jail),” Moore said at a November press conference.

Jail diversion and a fresh look at the cash bail system

Cook County Sheriff Tom Dart, Cook County Circuit Court Chief Judge Timothy Evans and County Board President Toni Preckwinkle have all vowed to consider abolishing or significantly changing the cash bail system in Cook County courts. These changes may take place in 2017, and may be sped up by court order if a class action lawsuit moves forward.

Dart has long complained that Cook County Jail is used as a holding area for indigent defendants with mental health problems charged with non-violent crimes.

“What type of society are we that we dump them in here?” Dart asked at a November press conference. “They don’t need to be here. Through a lot of the work we have been doing for the last few years we have been able to get a lot of those people out of here and that is what this division used to hold. This would hold minimum (security) people, people who had issues, people who had low-level offenses.”

The Cook County Sheriff’s office revamped website home page lists the number of persons considered under custody of the jail: 9,607 at the beginning of the year. Of those, 2,170 are outside the jail walls in community correction programs, the website says, with a total behind-the-walls inmate population of 7,437. The sheriff’s website also lists the number of indigent non-violent detainees who cannot afford to pay bond of $1,000 or less on their bail amounts: 159. Some inmates can languish in jail a year or more, waiting for their trials.

The cash-bail process is unfair to the poor and keeps non-violent persons in custody while releasing those who may have committed a violent crime, but can afford to bail out, according to a class-action lawsuit filed in October on behalf of non-violent inmates held for inability to pay. Being able to afford a bond deposit is not necessarily connected to the likelihood of a detainee attending a court date. Preckwinkle has said that only 4 percent of nonviolent offenders fail to show up for a court date, and those instances are often caused by lack of transportation, or other personal problems. Preckwinkle said the county was looking into an electronic-based court reminder system for cell phones in 2017.

Anti-bail activists from the Chicago Community Bond Fund have paid bonds for 50 inmates based on a revolving bond fund of around $100,000 in donations raised online.

“Bond is essentially unfair and unjust. High bonds are justified by the idea that they keep us safe, but setting monetary bond undermines the very idea that safety should govern release or detention decisions,” said a statement on the CCBF website. “Someone who is not dangerous should be released regardless of their access to money; likewise, someone who is truly dangerous should not be released simply because they can pay bond … The simple inability to pay bond often has severe negative consequences on the very things that help someone charged with a crime succeed: employment, stable housing, and strong family and community connections.”

The Illinois Supreme Court is also working on an analysis of the fairness and effectiveness of the cash bail system. In October, the members of the court participated in the national “3DaysMatter” movement that aims to divert defendants from the jail system before they end up in pre-trial detention.

Eliminating cash bail in Cook County may have an effect on reducing the entire Illinois prison population if non-violent detainees can serve their sentences in non-incarceration settings before trial, supporters believe.