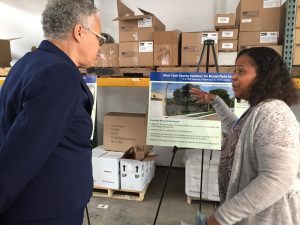 Redeveloping industrial and blighted properties and getting them back on the tax rolls is the goal of a county initiative to help identify “brownfield” sites in west suburban Cook County.

The U.S. EPA awarded $600,000 in 2014 to the Cook County Department of Environmental Control to assess parcels of land in seven suburban towns that might have industrial or pollutant contamination. Engineers evaluated 30 sites covering a total of 127 acres in Bellwood, Forest Park, Franklin Park, Maywood, Melrose Park, Northlake and Schiller Park.

“The redevelopment and reuse of brownfield sites is a great opportunity for economic development — redeveloped sites generate revenue and jobs while helping the environment,” Preckwinkle said.

Business owner Thomas Engoran said he wanted to buy the lot adjacent to his company to use for parking and possible warehouse expansion. By having the property assessed through the program, Engoran said he felt more confident making the purchase, knowing there would likely be no surprises.

Engineers took soil samples and looked for evidence of underground gas tanks, which are often an expensive environmental remediation challenge, said Chrystine Shelton, project manager at Weaver Consultants Group. “Businesses are looking for a ‘No Further Remediation’ letter from the EPA,” Shelton said. In a few cases, engineers found no contamination, Shelton said.

Angela Smith, Maywood’s coordinator of business development showed Preckwinkle and commissioners Richard Boykin and Peter Silvestri a poster board depicting a dilapidated auto garage purchased by the Land Bank. The county helped determine what was needed to remediate the site, Smith said. “The garage will be torn down and we hope to build a police substation here,” she said.

Many of the properties were municipality-owned or purchased by the Land Bank, but a few were privately owned, such as the former River Rock Restaurant in Schiller Park. Four other sites are under redevelopment, and one — the former Maywood Park racetrack — is in negotiations with a developer.

More than 200 jobs could be generated by the redevelopment, the county predicted.

“This program allowed the Village of Maywood to receive funding for environmental assessments,” said Maywood Mayor Edwinna Perkins, in a statement. “[These] will lead to development of several vacant lots that had no hope for redevelopment.”