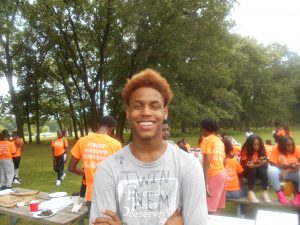 Aziz Hunter, a 16-year-old from Country Grove Hills, said that when his relative suggested that he join the Forest Preserve Experience summer job program, he was skeptical.

“At first, I was reluctant to join,” he said. “I didn’t know how difficult it would be to get up early.”

Patrice Cage, an 18-year-old from Lansing, had her own misgivings.

“At first, I was kind of nervous, because I never worked outside before, and I never had a job,” she said.

But the two soon discovered that they enjoyed working outside. Hunter said that, after two days, he “got into the rhythm” and found it to be “a good, productive use of my time.” And Cage said that her worries were [she] learned a lot.”

The program runs for five weeks, wrapping up at the end of July. The students are paid $10 an hour, and they get work experience that helps them get job opportunities in the field. And while the students who spoke to the Chronicle didn’t necessarily want to work in the field in the future, they all agreed that the experience expanded their horizons and taught them skills that can come in handy at any job.

FPE program launched in 2017. According to FPCC spokesperson Carl Vogel, the organizations involved were well aware that unemployment among African-American youth is high, and natural conservation and environmental science fields as a whole tend to be overwhelmingly white. 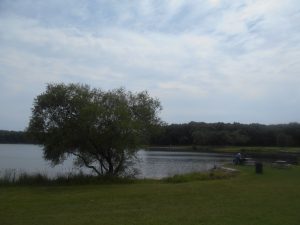 “For many [teens in the program], it’s their first paycheck and their first time in nature,” Vogel said.

Alice Brandon, the Resource Manager at FPCC, said that FPE is part of her employer’s broader conservation effort. The teens who take part in this program can advance to adult programs, where they will have full-time jobs.

HACC spokesperson Nick Mathiowdis said that, in order to get in, students must fill out an application, answer several essay questions and go through interviews. One recurring theme among all the students who spoke to the Chronicle was that they either had a relative tell them about the program or had an older sibling who is part of the program.

Mathiowidis said they originally planned to have 80 spots this year, but with 400 students applying, HACC decided to commit another $85,000, allowing the program to hire additional 32 students and five crew leaders.

FPCC has forest preserves all over Cook County, teens tend to be sent the ones in the south suburbs.  This year, that included Lansing’s Jurgensen Woods, Thornton’s Wampum Lake Woods, Glenwood’s Sweet Woods, and Sauk Trail Woods, which fall within portions of Park Forest and Chicago Heights. Possum Hollow Woods, which is located in west suburban Westchester, is the only exception.

Brandon explained that this is partially due to simple geography. As previously reported by the Chronicle, most of HACC family public housing developments are located in the south suburbs, with only a few located in the north and west suburbs. While FPCC do drive students to work sites, they didn’t want to make the trips too long lest the buses wind up stuck in traffic.

Mathiowdis estimated that about 80 percent of the teens come from the south suburbs and about 20 come from west suburbs.

The other factor behind the site choices is what features the preserves have.

“The sites must have a picnic shelter, so the youth can eat lunch and have somewhere to do environmental education activities if it starts raining,” Brandon said. “We also look for sites with shade and good work to do. If the site is extremely damp, for example, with lots of mosquitoes and we can go to another site and not have these conditions, then we will do that.” 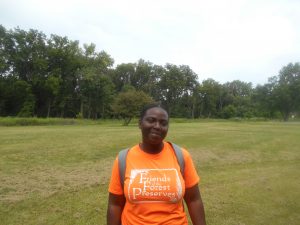 According to the Forest Preserves Foundation’s website, teens spend about 40 percent of the workweek learning about topics such as particulars of local wildlife and environmental justice. The teens also have opportunities to do activities offered to all visitors, such as archery, rock climbing, camping and canoeing. As for the work, it mostly involves removing invasive species of plants. Brandon said that since those species have no natural predators in the forest preserves ecosystem, they tend to crowd out native plants, which hurts the entire food chain.

Hunter said that he worked to remove one such species — buckthorn. While it was hot outside, he appreciated the importance of removing it, since “it takes sunshine away from living things.”

Ryah Revis, a 15-year-old from Markham, said that this was her second year in the program.

“It really helps us stay out of trouble, gives us experience, if we want to take this [type of job],” she said. “It pays good. And I think it’s important, because there aren’t a lot of people who care about nature and clean it up.”

Teens who take part in the program can work their way up to being crew leaders. Derell Lawless, a 17-year-old from Dolton, said that he started out as a regular crew member and spent the last two years as a crew leader. He explained that he was responsible for taking attendance, making sure everybody did their job and making sure everybody got on the bus, while still doing his share of invasive species removal work.

“I definitely plan on coming back next summer,” Lawless said. “It’s good money and, believe it or not, I like being in the forest.”

Brandon explained that, while the teens won’t get any preferential treatment if they apply for full-time positions at FPCC, they can work their way up to adult conservation programs. In the process, they can get certifications that come in handy when applying for jobs in the field.

“We’ve had youth start in high school with us and advance into our adult programs, and from there go on to full-time jobs in the conservation field with organizations such as the Chicago Park District, U.S. Environmental Protection Agency and local environmental consulting firms,” Brandon said.

Mathiowdis said that, given that the program hasn’t been around that long, it was hard to measure its impact — but so far, what he has heard has been promising.

“I can say that a few of the participants have gone on to participate in other leadership programs recommended to them by FPE leaders,” he said. “Others have received their college letters of recommendation from FPE staff.”

All of the students who talked to the Chronicle said that they got something positive out of the program. Lawless said he was able to get several useful certifications — and he felt that it helped build character.

“To do the job, you have to be open-minded,” he reflected. “A lot of people — they’re open-minded, [but] not all the way.

“I definitely have a lot more responsibility,” Cage said. “I grew as a person and I learned a lot of leadership skills. I learned to work together with people, and speak up, and talk with people.”

“It was a good learning experience,” Hunter said. “It gave me a better understanding for the world around me, that there’s a bigger world, more important world that just my house. It’s been a good, productive use of my time.”

He added that he was proud of the fact that he was able to get something he wanted — a game console — with the money he worked hard to earn.

“That’s number one, so I can help my mom out with bills, and so my siblings can go places,” she said.