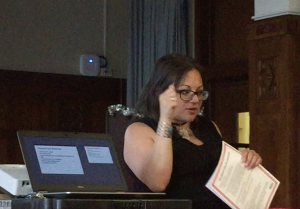 As the federal government announced national plans for a month-long series of deportation raids starting in May and June, immigrants in Cook County without legal immigration status are seeking information about their rights and looking for programs to help them.

Immigration lawyer Mony Ruiz-Velasco said many undocumented students over the past few years placed their college hopes on proposed DREAMer legislation, which would have given them a chance at federal college financial aid. The proposed DREAMer laws were never passed leading to the DACA executive order.

Parents at the presentation agreed their students were frustrated.

Ruiz-Velasco explained how students at Proviso could determine if they were eligible for the DACA program. The discretionary program allows young people under age 30 to apply for a temporary two-year “deferred action” status. This means that they are “put lower down on the deportation list and are allowed to work for two years,” Ruiz-Velasco said. They are also issued a Social Security number, which allows them to leave the country and re-enter.

To apply for DACA, young people must prove they were in the country in 2007, usually through school records, Ruiz-Velasco said. She said evidence must be presented that candidates had attended high school in the U.S., attained a GED or served in the U.S. military. Applicants must also have been in the country in 2012 when the executive order was passed. Courtroom evidence must be obtained of the disposition of any criminal charges for felonies and even misdemeanors. The fee is $465.

If accepted for DACA, the student has permission to work or attend college in the U.S. for two years, which can then be renewed.

What to do in a deportation raid

Ruiz-Velasco also told parents about raids announced by the U.S. Department of Homeland Security Immigration and Customs Enforcement (ICE) agency. A planned 30-day raid period in May-June was leaked to Reuters and other news agencies in mid-May. The plan will target Central American women and children fleeing violence who were captured entering the U.S. illegally last year and then did not return for their court dates, according to Reuters.

A similar series of raids in January this year detained more than 150 families in California, Maryland, Georgia, North Carolina and Texas. Immigration advocates complained the raids were harsh and hurt women and unaccompanied children.

Homeland Security Secretary Jeh C. Johnson said the January raids were necessary to enforce the laws of the United States.

“I know there are many who loudly condemn our enforcement efforts as far too harsh, while there will be others who say these actions don’t go far enough,” Johnson said in a January 2016 statement. “I also recognize the reality of the pain that deportations do in fact cause. But, we must enforce the law consistent with our priorities. At all times, we endeavor to do this consistent with American values, and basic principles of decency, fairness, and humanity.”

Ruiz-Velasco works with immigrants who have been detained by ICE officers. At the meeting, she advised parents to teach children to “never open the door” since ICE agents operate without a warrant and will enter if a door is opened. She also noted that ICE agents often drove unmarked vehicles and often did not wear uniforms. Ruiz-Velazco also advised parents to keep important documents in a safe place and to memorize a telephone number of a trusted friend, relative, or a lawyer.

She urged parents to plan ahead with children. If detained, Ruiz-Velasco told parents to give only a name and date of birth. This information is entered into an inmate database and allows family members to find a detainee.

More DACA information sessions are planned for this summer at Proviso West High School in Hillside and Proviso Math and Science Academy in Forest Park.