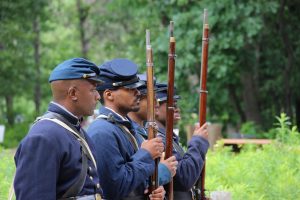 For the third year in a row, on June 17, Maywood resident Mike Rogers will dress himself in a Civil War-era Union Army uniform and climb to the balcony of the restored Home for Soldiers’ Widows, 224 N. First Ave. There, he’ll read the 1865 Galveston, Texas proclamation: “All slaves are free … The freedmen are advised to remain quietly at their present homes and work for wages.”

This historic re-enactment is one of the “Juneteenth” or “Freedom Day” events around Cook County. Other events include a pool party in Forest Park and a nature walk to underground railroad sites in South Holland at Cook County Forest Preserve at Sand Ridge Nature Center.

Juneteenth is officially celebrated in more than 40 states. It began as a way to commemorate the end of slavery in the state of Texas in 1865. Although Abraham Lincoln had declared the Emancipation Proclamation in 1863, and Gen. Robert E. Lee had surrendered, ending the Civil War in April, 1865, it wasn’t until two months later that 2,000 Union soldiers sailed to Galveston and made it clear that slavery was over in the state of Texas.

In rural, coastal Texas, slave owners hadn’t been anxious to share the news.

On June 19, 1865 Union General Gordon Ranger, backed up by a regiment of Union soldiers, read the statement from a balcony.

The celebration of freedom broke out in Texas and a yearly holiday was born across the region. Freed slaves and their descendants gave the holiday a nickname, mashing up the words “June” and “Nineteenth.” Special celebrations were planned, often in “Freedom parks,” plots of land purchased by members of the African-American community. 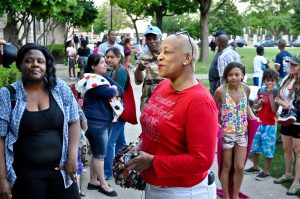 “It’s educational at this point because so many people don’t have a clue,” Rogers said.

Juneteenth was recognized as an Illinois state holiday in June 2003 in a General Assembly bill brought by then-State Senator Barack Obama. Juneteenth is not meant for only African-Americans, Obama said in June 2016.

“On this Juneteenth, we remember that struggle as we reflect on how far we’ve come as a country,” he said. “Juneteenth is a time to recommit ourselves to the work that remains undone. We remember that even in the darkest hours, there is cause to hope for tomorrow’s light.”

Chicago’s DuSable Museum of African-American History in Hyde Park will give Juneteenth a pass this year after last year’s events. Gov. Bruce Rauner publically cancelled his appearance at the museum last year because activists were threatening to protest the Illinois budget impasse.

West Town Museum of Cultural History curator, Jeri L. Stenson led historical tours of Maywood earlier in the week with a special stop at Maywood’s Underground Railroad site, the “Ten Mile House” at Lake and the Des Plaines River. The cabin was a 10-mile ride from Chicago and could shelter a rider or cargo. In the 1990s, Stenson and other researchers found evidence that runaway enslaved people would stop for shelter at the cabin. Stenson, 85, received an award from the state for her research.

In Maywood, the Juneteenth celebration will continue June 17 at the West Town Museum of Cultural History, between noon and 6 p.m. at 104 S. 5th Ave. where a meal described as “A taste of Emancipation Soul” will be served for $10. A panel “Are We Really Free?” will be led by former WGCI radio personality Al Sylk discussing “economic empowerment, post-traumatic slave syndrome, black liberation, racism and white supremacy” and other topics.

Galveston native Rory Hoskins, an attorney in Forest Park, has organized a Juneteenth Pool Party since 2009 in Forest Park. The pool party will be held 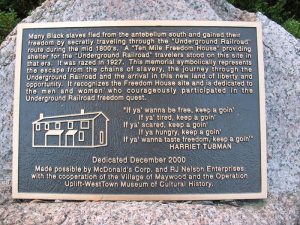 A plaque celebrating the “10 Mile Freedom House” in Maywood near Lake street and the Des Plaines River. (Photo courtesy of West Town Museum)

“In Galveston, Juneteenth is a big deal, similar to Mardi Gras in New Orleans,” Hoskins said. “There are parades, and music and food. The city gives out scholarships.”

“Having Juneteenth at a swimming pool is significant because pools were the last public spaces to be integrated in the South during the Civil Rights Movement,” said Gerald Lordan, a Fenwick High School history teacher.

Near South Holland, Dutch Reform settlers and farmers became strong supporters of the abolitionist movement during the 1800s. Dutch farmers such as Cornelius Kuyper Sr., of South Holland hid many enslaved people during the 1860s who were following the southern edge of Lake Michigan to Detroit and then to Canada, according to a 1943 Chicago Tribune article about the visit of a national “Freedom Train” to Calumet. 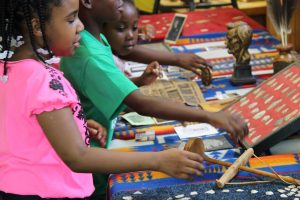 The festivities also include a taste-testing of Southern specialties such as Hummingbird Cake or Lemon Chess Pie. Nature Center staff and volunteers create the desserts from the special “Summer Desserts of Juneteenth” cookbook. The Nature Center will also present an exhibit on Emancipation quilts.

“We wanted to expand out some of the similar activities we do for Settlers Day in the fall,” Carpenter said. “This is our fourth Juneteenth, and it’s proving perfect for that.”