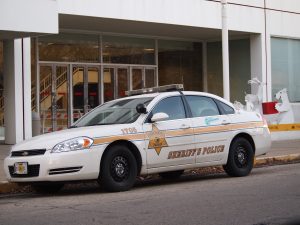 Cook County has re-established its Merit Board for the Sheriff’s Department after it was determined a former board member was on the panel for three years longer than he should have been. The revelation voided three years of disciplinary actions taken by the panel. (Kevin Beese/Chronicle Media)

A technicality with a panel of the Cook County Sheriff’s Department may put taxpayers on the hook for millions of dollars in back pay and lawsuits from dismissed and disciplined deputies.

The Merit Board has been reconstituted, but that may not be enough to stave off legal action from fired and suspended Sheriff’s Department employees.

John Rosales was appointed to the Merit Board in June 2011 for a term expiring in March 2012. However, Rosales never left the board and served on the panel until being pegged for the Illinois Commerce Commission in March 2015.

An Illinois appellate court has ruled that Sheriff’s Department personnel decisions made during that three-year window when Rosales was not authorized to sit on the merit panel are invalid because the board was improperly constituted.

The court’s justices said that Rosales was not reappointed to the panel despite continuing to serve on it.

On Feb. 27, 2013, Rosales presided over the hearing on Sheriff Tom Dart’s complaint against deputy Percy Taylor, which led to Taylor’s termination in October 2013.

“The court found that the Merit Board was not lawfully constituted at the time it rendered its decision, and therefore, its decision could not be given effect,” Appellate Justice Shelvin Hall wrote in issuing the court’s opinion in the case that could set precedent for other legal action from disciplined deputies.

decision, and therefore, its decisions are void.

“The Merit Board was not functioning as it should,” county Commissioner Larry Suffredin admitted last week.

Six of the seven people serving on the new Merit Board also served on the old board, but needed to be reappointed to the new panel that got approval from the General Assembly in Springfield and the governor’s signature last week. County commissioners finalized the new panel with appointments at last week’s County Board meeting.

The only new member to the Merit Board is Juan Baltierres, a criminal defense attorney who was a Department of Corrections parole agent for 10 years.

Returning to the newly constituted board are: Patrick Brady, Byron Brazier, John Dalicandro, James Nally, Kim Widup and Vincent Winters. Nally will serve as chairman of the panel.

Commissioners Sean Morrison and Jeff Tobolski both voted “present” on Nally’s reappointment, citing having been involved with him professionally.

Board terms will be staggered with Baltierres and Widup’s terms expiring in 2019, Nally and Brady serving until 2021, and Brazier, Dalicandro and Winters in their seats until 2023.

“This is the best way to protect ourselves from potential judgment,” Suffredin said. “The court ruled that the Merit Board was not properly constituted.”

Commissioners would normally send such panel appointments to a county committee for consideration, but opted to take immediate action on the appointments last week due to the urgency of the issue.

The Merit Board has stopped meeting, suspending its case docket, until the new law was passed, establishing a reconstituted panel. Status hearings, however, were still being held in the interim.

County officials said that some 250 cases have been in some form of limbo since the appellate court’s decision earlier this year.

Read the current digital edition of the Cook County Chronicle

— Cook County may be liable for police firings, suspensions —-