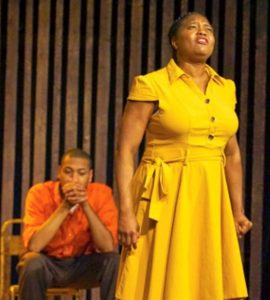 Michael Rawls and Shadana Patterson perform a scene from Evanston’s Fleetwood-Jourdan Theatre’s production of “Yellowman.” They and the production have been nominated for Black Theater Alliance/Ira Aldridge Awards.

The Chicago Book Expo will feature more than 80 exhibitors, including Chicago-area publishers selling books and nonprofit literary organizations. In addition, the Book Expo will offer more than 20 free events and workshops with local authors.

Global politics will be discussed at a panel about Syrian refugees with Wendy Pearlman. A panel on racism and Trump will feature Haki Madhubuti talking about his new book, “Not Our President.”

Chicago history and culture will be topics of sessions with Pamela Bannos’ talking about her new biography of street photographer Vivian Maier, novelist Jac Jemc, poets Eve Ewing and Nate Marshall, Liesl Olson discussing Chicago’s role in literature with Fred Sasaki of the Poetry Foundation, and a discussion about the new book “Rust Belt Chicago.”

Numerous architecture events include a panel with the creators of the Chicago Architecture Foundation’s new graphic novel about Chicago and a discussion on Chicago’s fountains and bridges.

A variety of writing workshops and panels will be offered. For more information and a complete schedule, go to chicagobookexpo.org.

Upon arriving in Houston, they met with Houston city officials to discuss how to distribute the donations. After unloading one semi, they were directed to re-route the second truck to an alternate distribution warehouse. With the help of Houston’s Teamsters Local 988, village officials unloaded and sorted the pallets of goods, all of which were generously donated by Tinley Park and Orland Park residents.

Evanston’s Fleetwood-Jourdain Theatre has received 11 nominations for the 23rd annual Black Theater Alliance/Ira Aldridge Awards. The Black Theater Alliance Awards, Inc. was founded in 1995 to honor African-Americans who achieve excellence in theater, dance and all areas of the performing and technical arts in the Chicago area.

Stage productions produced and presented Aug, 1, 2016, through July 31, 2017 were eligible for this season’s awards. Winners will be announced Oct. 23 at the BTA Awards held at the Conaway Center at Columbia College, 1104 S. Wabash St., Chicago.

Fleetwood-Jourdain Theatre is a city of Evanston-sponsored professional theatre with a commitment to diversity and creative excellence. For more information, visit fjtheatre.com or call/text (847) 448-4311.

Oak Park village officials are weighing the merits of spending up to $200,000 to study what to do with the Oak Park Police Department. The department is housed in the basement of Village Hall, a space that critics say is outdated, overcrowded and unsuitable for a modern police force.

The study would determine if the village should build a new station or rehab the existing one.

The item is part of the village’s Capital Improvement Plan (CIP), a $27 million, five-year plan for various capital projects that the Oak Park Board of Trustees is considering.

A firm price tag the feasibility study could be less or could be more if the project is approved and put out to public bid. The proposal also includes a tentative $15 million to build the police station in 2019.

Schaumburg’s police and fire departments will invite the public to see how they operate during the village’s annual Public Safety Open House, 11 a.m.- 2 p.m. Sept. 30. Interactive demonstrations and exhibits will take place at Fire Station 51, 950 W. Schaumburg Road, and the police station next door, a000 W. Schaumburg Road.

At the fire station, families can take a tour and see extrication demonstrations, learn about fire gear and equipment, let their children spray a fire house and climb on the trucks, and participate in other fun activities.

The police station will display vehicles and equipment used by officers, host police dog demonstrations, show how evidence is collected and how Tasers are used. Information on Crime Prevention information and the department’s other programs and services also will be available.