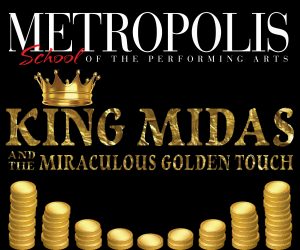 This black-tie encouraged evening, which runs from 5 p.m. to midnight, includes open bar, hors d’oeuvres, silent auction prize drawings; a seated dinner and show featuring, Metropolis theater professionals and students from the Metropolis School of the Performing Arts. The evening concludes with an After Party featuring DJ Player2.

Celebrity Emcee for the evening is Howard Sudberry, Senior Director of Marketing & Communications, Arlington International Racecourse. Celebrity Auctioneer is Neil Scheufler, Metropolis Performing Arts Centre Major Gifts and Planned Giving Officer. This year’s Spotlight Award recipients are Tom & Mary Ann Deming, longtime Metropolis benefactors with a deep appreciation of the performing arts. Entertainment Headliners include the casts of “A Funny Thing Happened on the Way to the Forum” and “Buddy: The Buddy Holly Story;” with Featured Performances by students from the School of the Performing Arts, in a selection of songs from “You Can’t Stop the Beat: Broadway Showstoppers;” and Supporting Players featuring faculty and staff performances, including a musical sneak-peak of the 2019/2020 season.

Metropolis is located in the heart of Chicago’s northwest suburbs in downtown Arlington Heights at the intersection of Campbell and Vail Ave at 111 W. Campbell Street. For more information about Metropolis and a listing of upcoming performances, go to MetropolisArts.com or call the Box Office at 847.577. 2121.

In the 50 years since his death, the words of Martin Luther King Jr. have resounded with Americans. Nationally acclaimed civil rights advocate George D. Arnold will bring those words to life 2 p.m. April 2, at Oakton Community College’s Student Center, 1600 E. Golf Road Des Plaines. The event, free and open to the public, is sponsored by Oakton’s Center for Campus Inclusion and Diversity, Office of Student Life and Office of Access, Equity, and Inclusion.

Dedicated to keeping King’s memory alive, Arnold will present “Echoes of Dr. King.” For nearly 50 years, he has delivered this stirring tribute, reciting King’s speeches and letters to more than 1,500 schools, churches and civic organizations.

Arnold has delivered King’s “I Have a Dream” speech at the dedication of the chapel at Morehouse College, King’s alma mater, in Atlanta. Also, he has recited King’s “I Have Been to the Mountaintop” address for 250,000 people in front of the Lincoln Memorial to commemorate the 20th anniversary of the 1963 March on Washington.

On March 28, the Chicago Citywide Literacy Coalition will host its 4th annual Beyond Books award ceremony at the Newberry Library. This year CCLC will honor Julie Morita, Commissioner of Chicago Department of Public Health, as the Literacy Leader Award winner, placing a focus on the many ways in which literacy and health intersect.

By 2020, more than 67 percent of jobs in Illinois will require postsecondary education or training. Yet 3 million adults lack education beyond high school.

The effects of this shocking educational gap are widespread, not only felt by these underserved adults and their families, but causing economic ripples across Illinois. Adult education saves the government millions of dollars by reducing the need for state-subsidized programs such as public aid, housing, unemployment, food stamps, Medicaid and corrections. For every dollar spent on adult education, Illinois is paid back $2.50.

Recognizing this connection between literacy and the state’s overall wellbeing, the Chicago Citywide Literacy Coalition (CCLC) aims to improve the quality and build the capacity of adult basic education programs in Illinois through work with and support of 40 organizations over the last 10 years. This month, the CCLC was one of 24 nationally-recognized XPRIZE award recipients. As a result, the CCLC will be given a code to distribute, providing any adult learner with free access to an app that will help them with their reading and writing.

$123 million from feds for state highways and bridges

In its 2019 appropriations bill, the Federal Highway Administration awarded more than $123 million to Illinois to repair its highways and bridges.

According to a news release from Illinois Senators Dick Durbin and Tammy Duckworth, both Democrats, the state has the third-most bridges in the country with a total of 26,775.

Almost 9 percent of those bridges, however, are considered structurally deficient – the fifth-highest number in the nation.

The news comes as the Illinois Department of Transportation lays out its needs for a potential statewide capital plan, including $13 billion to $15 billion over the next 10 years for road and bridge maintenance alone.

But with infrastructure hearings from both chambers scheduled into mid-April, it is unlikely the state will finish a capital plan by this year’s construction season.

A study from the nonprofit Illinois Public Interest Research Group gave the state a B-minus rating for addressing lead in school drinking water, improving from a D grade in 2017.

On Thursday, state Sen. Heather Steans, a Chicago Democrat, advanced the Reduction of Lead Service Lines act, Senate Bill 1532, out of the Senate Environment and Conservation Committee, although she said a further amendment was needed and it will be brought back to the committee for another vote at a later date.

“What we’re working on trying to do with the bill is have water suppliers inventory lead service lines and come up with a plan to replace them,” she told the committee. “It’s complicated and we’re working with lots of different parties on it.”

The PIRG study said most schools and preschools have pipes that contain lead, making them susceptible to leaching contamination.

A state law passed in January of 2017 requires testing for lead in Illinois schools built prior to 1987 within the 2017 year, according to a PIRG press release. Schools built between 1987 and 2000 are required to have tested and submitted results to the Illinois Department of Public Health by the end of 2018.

Jerry Nowicki and the Capitol News Illinois staff contributed to these briefs.