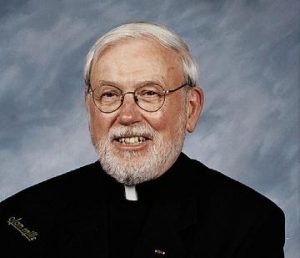 A memorial Mass for the Rev. John Baldwin, retired U.S. Navy chaplain, was celebrated Sept. 14 at St. Norbert and Our Lady of the Brook Church, Northbrook.

Bishop Francis Kane was the main celebrant and the Rev. Ronald Kalas, vicar for senior priests, was the homilist. Interment was after the liturgy at Calvary Catholic Cemetery, Evanston.

Baldwin was born Sept. 14, 1933, in Chicago and attended St. Clare of Montefalco Catholic Church and Quigley Preparatory Seminary, both in Chicago. He graduated with a master’s degree from the University of St. Mary of the Lake/Mundelein Seminary in 1958.

Baldwin was ordained to the priesthood May 7, 1959, by Cardinal Albert Meyer, archbishop of Chicago, and celebrated his first Mass at St. Clare of Montefalco on May 10 of the same year.

After ordination to priesthood, Baldwin served the archdiocese as assistant pastor at Resurrection Parish on Jackson Street in Chicago and St. Joseph Parish in Round Lake. He was assigned as chaplain of the U.S. Navy in 1968 and served in that role until retirement.

Monsignor Michael Adams, pastor emeritus of St. Mary Star of the Sea Parish on 64th Street in Chicago and a classmate of Baldwin, had known him for 70 years.

“He was curious about everything. He liked to talk to people — he was very friendly, and people responded well to him,” Adams said.

The Rev. Edward J. McLaughlin, pastor emeritus of St. Michael Parish in Orland Park, remembers his classmate as a very inquisitive person and a great musician.

“He loved to serve the Navy,” McLaughlin said. “He was very dedicated as a chaplain and very proud of it.”

“He was always interested in many new things and had traveled the world,” said Kalas, adding that his classmate was very interested in organ music.”

Chicago police are searching for burglars who have been entering houses through open windows in the East Beverly neighborhood.

The offenders removed the screens and entered the homes through open window between midnight and 6 a.m.

In one incident, a victim heard movement in the house around 4 a.m. and saw three males running out of the residence. The offenders took the victim’s car keys and fled in the individual’s car.

The burglaries were all in the 10300 to 10700 blocks of Wood Street to Prospect Street.

The offenders were described as three males wearing hooded sweatshirts and blue jeans. One offender was holding a flashlight. The estimated age of the offender is between 18 and 25.

Police offered the following tips to avoid being the victim of a residential burglary and how to react if a burglary victim:

Anyone with information about the burglaries or offenders should contact the Chicago Police Department’s Bureau of Detectives for Area South at 312-747-8273.

The course includes classroom instruction on the rules of high school basketball and appropriate IHSA officiating mechanics and officiating philosophy.

The class incorporates over 100 video clips and numerous review sessions of NFHS rules.

Officials new to the IHSA will be able to obtain an officiating license at a reduced rate.  Completion of the class will allow the participant to earn IHSA Level 1 Clinic Credit.  Participants must attend a minimum of five sessions to be eligible for IHSA clinic credit.

For more information and to register for the classes on-line, visit the IACO website at: www.iaco-official.org