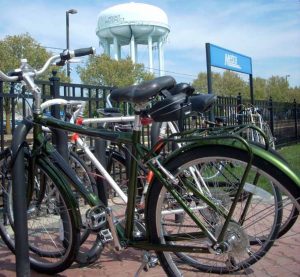 In conjunction with the Mount Prospect Bicycle Plan, adopted in 2012 to provide a framework for implementing a broad bike network and to encourage more people to choose biking for everyday transportation, the village announced plans for a Bike Route Signage Project.

The village’s Sustainability Commission is inviting residents to visit its booth from 9-11 a.m. Aug. 6 during Farmers Market, which is held from 7 a.m. to 12:30 p.m. each Saturday morning (through Oct. 15) in the Metra station commuter parking lot, located at the intersection of Deerfield Road and Robert York Avenue. The booth, intended to promote water and energy conservation efforts, will offer reusable water bottles featuring the “Green Up Deerfield” logo for $3, and host a water-tasting event. In addition, free milkweed seeds will be given to the first 500 visitors in an effort to help preserve and strengthen the dwindling Monarch butterfly population. Other activities at the Farmers Market on Aug. 6 include a market drawing, a bake sale by the Zeta Tau Alpha Sorority North Shore Alumnae Group and live entertainment by L.J. Slaving & Hector Fernandez from 10-11:30 a.m. Representatives from the Deerfield Education Foundation and the Lake County Forest Preserve & Preservation Foundation will be on hand as well. For more information, call (847) 945-5000 or visit www.deerfield.il.us.

In conjunction with the Mount Prospect Bicycle Plan, adopted in 2012 to provide a framework for implementing a broad bike network and to encourage more people to choose biking for everyday transportation, the village announced plans for a Bike Route Signage Project. The project will create 16 miles of on-street bike routes in the village, with a goal of connecting certain destinations (including downtown, Randhurst Mall, Melas Park, Lions Park, RecPlex and Woodland Trails Park) by using select residential streets as designated bike routes. The network of routes also will connect to existing bike routes in Arlington Heights and Prospect Heights. Work will include the installation of signs and pavement markings. Standard bike route signs, destination signs and bike crossing signs at signalized intersections will be installed throughout the network as well. The project does not include constructing any off-street bike paths, and will not affect street parking for vehicles. The project — tentatively scheduled to be completed by September — is supported by the Mount Prospect Park District, River Trails Park District, the Mount Prospect Bike Club and the Mount Prospect Chamber of Commerce. For more information, contact the Public Works Department at (847) 870-5640, send an email to publicworksdepartment@mountprospect.org or visit www.mountprospect.org/bikeroutes.

The AMITA Health Senior & Community Resource Center will host the 6th Annual Health & Wellness Festival from 10 a.m. to 2 p.m. Aug. 5 at the Elk Grove Park District Pavilion, 1000 Wellington Ave. The event will include informational booths from many AMITA Health departments, as well as representatives from several organizations and service providers within the AMITA Health community. The event also includes presentations on vision, incontinence, advance directives and an exercise class. In addition, free health screenings will be offered, including blood pressure, cholesterol, blood sugar and hearing. Prevnar Pneumococcal vaccines will be available as well. In addition, the Illinois Secretary of State Mobile Unit also will be available to assist with driver’s license renewals and identification cards. Snacks and refreshments will be provided. Admission is free; pre-registration is required for all health screenings (except blood pressure) and for the Mobile Unit. To register, and for more information, call (847) 965-5465.

During a recent Village Board meeting, village trustees formally recognized Fire Chief Rick Ronovsky and Fire Captain Dave DeWolf for reaching their respective 30th anniversaries with the Hinsdale Fire Department. Ronovsky was appointed Fire Chief in 2012 after previously serving as Captain and Lieutenant. He also serves on the Illinois EMS Region 8 Advisory Board, the Triton College Fire & EMS Advisory Board, the MABAS 10 Incident Management Team, and the DuComm Executive Board. DeWolf, who was promoted to Captain in 2012 after previously serving as Lieutenant, was one of the founding investigators of the DuPage County Fire Investigation Task Force, an currently serves as a Commander. He also is a member of the MABAS 10 Fire Investigation Task Force. In addition, Fire Captain John Gianelli was recognized for his 25th anniversary with the department. Gianelli became a Captain in 2012, and currently is a shift commander as well as the department’s Training Officer.

The Illinois Public Health Association (IPHA) Immunization Billing Project announced that the Town of Cicero Health Department has been certified for Stage 1 Meaningful Use, and will receive more than $21,000 as incentive to complete a required computerized database system. Meaningful Use utilizes certified electronic health record technology to document patient demographics, medical records and encounters. As part of the project, the Health Department recently began using ezEMRx, an electronic medical records system that includes complete revenue cycle management and is required as a necessary step to become certified for Stage 1 Meaningful Use. Over time, local health departments complying with Meaningful Use are expected to see improved clinical outcomes and a more robust client database equipped to provide essential data and reports on their populations. In addition, the Health Department plans to apply for Stage 2 Meaningful Use incentive funds when the certification is up for renewal in 2017.

The village announced that Growing Green Recycle Fest will be held from 8 a.m. to noon July 30 at the intersection of Main Street and Cunningham Lane (adjacent to Farmers’ Market) in downtown Park Forest. The event will include television disposal, at a cost of $10 per TV for the first 200 TVs turned in by Park Forest residents (limited to three TVs per home), and $20 per TV for non-residents. The event also includes document shredding (limited to three bankers boxes per vehicle), household batteries disposal, eye glasses disposal and shoe disposal (including donations of gently used shoes for re-use). To view a detailed list of acceptable items, visit www.villageofparkforest.com. For more information, call (708) 422-1551.