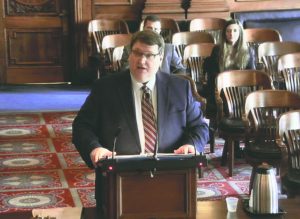 David Salmons, an attorney representing Walgreens, speaks during oral arguments March 12 before the Illinois Supreme Court in Springfield. Walgreens is being sued by customers who say the Illinois-based retailer misapplied Chicago’s water bottle tax to sparkling and flavored water sales. (Screenshot from video at illinoiscourts.gov)

SPRINGFIELD — Who should bear the loss when a retailer charges consumers a tax they were not supposed to pay?

That is one facet of a case before the Illinois Supreme Court.

At issue is whether several Walgreens pharmacies in Chicago charged the city’s water bottle tax accidentally or purposefully. The tax, instituted in 2008, applies only to still water, but Walgreens also applied the 5-cent tax to sparkling and flavored water.

The customers suing the Illinois-based retailer allege Walgreens misapplied the tax fraudulently. Walgreens’s attorneys, in a court document, said it was “collected in error,” and point to the fact the stores gave consumers a receipt with a line item for the bottled water tax as evidence it was not trying to hide anything.

But this case has implications outside the Windy City. John Marshall Law School professor Steve Schwinn said the two arguments are relying on competing laws.

“It’ll be interesting to the extent we’re able, to try to discern which public policy the justices prefer,” he said. “The stakes are high on both sides.”

The crux of Walgreens’ defense is the Voluntary Payment Doctrine, a long-standing rule that says money willingly paid by a consumer does not have to be refunded even if the consumer finds out later he overpaid, or paid an illegal fee, for example. 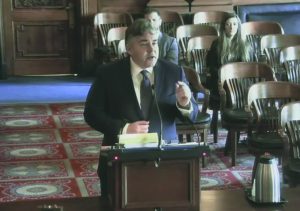 There are a few exceptions to that standard, including fraud and improperly benefitting from that payment. David Salmons, the attorney representing the retailer, said because the stores gave the tax money they collected to the city of Chicago, the latter exception is not valid because Walgreens did not benefit.

Attorneys for the customers, in a court filing, wrote they disagree that argument absolves the pharmacy chain from responsibility.

“With only modest exaggeration, Walgreens’ theory is the same as allowing bank robbers to claim the robbery should be excused because they gave the stolen money to charity,” according to court documents. “That is not a valid defense or good public policy.”

The Voluntary Payment Doctrine, the pharmacy chain’s lawyers argued, puts the onus on the customer to be educated about what taxes they must pay and the price of the goods they purchase.

“This idea that consumers are responsible for knowing the law — in fact, at one point, Walgreens’ brief says something about failure to know the law is no excuse — assumes a lot of information on the part of the consumer,” Schwinn said.

Todd McLawhorn, the lawyer who represents the customers, said “consumers would have to be super, hyper-alert” when making each transaction if the justices uphold the retailer’s logic.

He uses Illinois’ Consumer Fraud and Deceptive Practices Act to make his case. The law is designed to protect consumers from dishonest tactics, and provides hefty monetary damages. In this case, if successful, his clients could be entitled to damages, attorneys’ fees, costs and other funds the court deems necessary to award.

Justice Robert Thomas, during oral arguments Tuesday, asked McLawhorn about the implications of his lawsuit, should the Supreme Court decide in his clients’ favor. Local governing bodies across the state levy taxes, and retailers must comply, he pointed out.

“These tax ordinances are all over the place. I would imagine there’s a lot of mistakes going on, so in every one of those situations, a mistake or fraud could be inferred,” Thomas said. “Isn’t there going to be a ton of cases filed?”

That is an argument the Taxpayers’ Federation of Illinois made in a document submitted to the justices in support of Walgreens. In it, the group wrote it “believes retailers should not be subject to crippling liability for good-faith mistakes in applying complex tax laws.”

The Supreme Court is being asked to decide whether the customers sufficiently argued Walgreens engaged in fraud when it charged its customers Chicago’s water bottle tax on sparkling and flavored water.