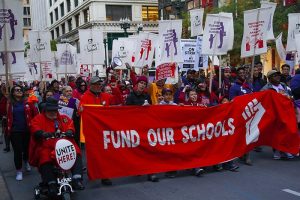 SPRINGFIELD — Two Chicago Public Schools employees are challenging the validity of their signed contracts to pay union dues as unconstitutional under a 2018 decision that ruled mandatory union dues are a violation of free speech.

Lawyers with the National Right to Work organization, which represent CPS employees Joanne Troesch and Ifeoma Nkemdi, have filed a petition with the U.S. Supreme Court that seeks to void the membership contracts signed prior to the Supreme Court’s decision in Janus v. American Federation of State, County and Municipal Employees.

In the Janus case, the U.S. Supreme Court decided that public-sector unions cannot require nonmembers to pay so-called “fair share” dues to subsidize the union’s speech, which they might disagree with.

The petition from Troesch and Nkemdi argues that after they resigned from the Chicago Teachers Union following the Janus decision, the union should not have been allowed to enforce the dues provision in their membership contracts, which they signed in 2017.

The membership contracts for Troesch and Nkemdi allowed them to terminate their CTU membership by resigning.

But the contracts also included a “dues authorization” section that provided employees can opt out of paying dues only during the month of August, even if the employees resigned from the union earlier in the year.

When the Chicago Teachers Union continued deducting dues from the paychecks of Troesch and Nkemdi after they resigned from the union, they sued the union in federal court in May 2020.

The lawsuit claims that CTU has violated their First Amendment rights by continuing to deduct dues after they resigned to subsidize the union’s speech. It also argues that protections afforded in the Janus case entitle them to stop paying dues, despite their contractual obligations.

In the Janus case, the court ruled that employees must “clearly and affirmatively consent” to having dues deducted, and the signed membership contract does not meet this standard of consent, they argued.

In February, a federal judge dismissed the case, finding that the Janus case did not support their argument because that case applied to nonmembers who did not consent to dues.

The CPS employees waived their rights not to subsidize CTU’s speech when they agreed to pay dues under their membership contract, the judge found.

National Right to Work Foundation President Mark Mix said in a statement that “the Supreme Court must quickly take up this issue and clarify that Janus does not permit union bosses to profit from curtailing workers’ constitutional rights.”

CTU and the Board of Education for the city of Chicago have until July 23 to respond to the petition.

Representatives from CTU and the Chicago school board did not respond to requests for comment.