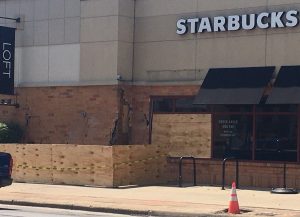 A car crashed into this building in the 400 block of Harlem Avenue, River Forest, at 12:49 a.m. Sunday, resulting in four fatalities. (Photo by Bill Dwyer)

Police responded to the crash with fatalities at 12:49 a.m. Sunday in which a vehicle had struck a planter, light pole, and the wall of a closed business in the 400 block of Harlem Avenue.

The vehicle was occupied by five people at the time of the crash. Two of the occupants were dead on scene. Two occupants needed emergent medical care and were transported to a local hospital where they later died. The victims were transported to the Cook County Medical Examiner’s Office for inquiry.

The reported driver of the vehicle was also transported to a local hospital for treatment.

Police are in the process of identifying the occupants of the vehicle and making notifications to family members.