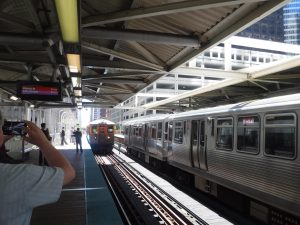 The CTA trains were slower than usual on the elevated Loop tracks on June 6 — and for a good reason.

Passengers waited on the crowded inner platform of Washington/Wells station, looking at the trains that were pulling up. They didn’t care about the regular Orange and Pink Line trains that went past them. But around 12:50 p.m., the train they were looking for finally arrived.

125 years ago, Chicago’s very first rapid transit line — the South Side Elevated line – launched, making the beginning of what would become the Chicago ‘L’ system. To celebrate the occasion, the Chicago Transit Authority ran two vintage trains around the loop. The brown-and-orange Series 4000 two-car train set, currently the oldest train set in CTA’s fleet, proved to be especially popular. Both cars were jammed to capacity, and the train engineer had to ask riders not to stay on too long, so that others would have a chance to ride it, too.

When it debuted on June 6, 1892, South Side Elevated line ran from the since-demolished Congress Terminal and 39th Street stations. The line was soon extended further south toward 63rd Street, where it turned east toward Jackson Park in order to provide service to the 1893 World Columbian Exposition. 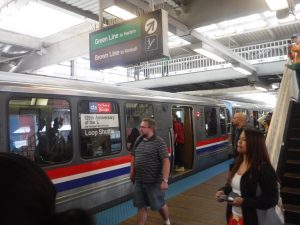 Since then, the line went through a number of service changes. Many stations shut down and the stations that did survive getting rebuilt beyond recognition, and the entire track structure went through extensive rehabilitation in the mid-1990s. But most basic routing still survives in what is currently known as the Green Line’s South Side Elevated and Cottage Grove segments.

Originally, the South Side Elevated trains were steam-powered. It wasn’t until 1898 that the line was fully electrified, and the trains started drawing power from the third rail.

In the meantime, several more companies launched their own elevated lines. In 1893, Lake Street Elevated company launched what is now the portion of the Green Line. Metropolitan West Side Elevated company launched what would eventually become portions of Blue and Pink lines in 1895. Originally, the three companies stopped just short of downtown, over the next two years, the elevated loop was built, allowing all three lines to serve the heart of the city. 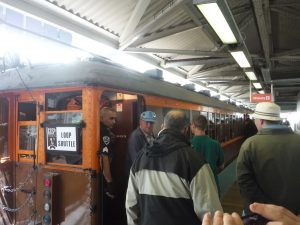 Passengers get on board the Series 4000 train. (Photo by Igor Studenkov/for Chronicle Media)

In 1900, the Northwestern Elevated company launched the service over what would eventually become the Brown Line, Purple Line and northern portions of the Red Line. Unlike the others, it served the Loop from the get-go.

Over the next four decades, the system went through a number of changes as the lines consolidated under the Chicago Rapid Transit Company. The CTA took over the service in 1947, and it has been operating it ever since. 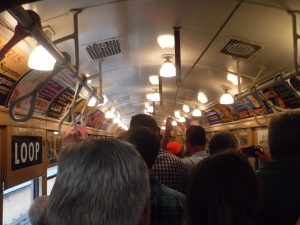 Inside the Series 4000 train. (Photo by Igor Studenkov/for Chronicle Media)

To celebrate the system’s founding, the transit agency brought out trains from its heritage fleet. Those trains are no longer used in regular service, but the CTA regularly maintains them, and occasionally rolls them out for special events.

The series 4000 trains are the oldest trains in the heritage fleet. They were built in 1923 and served the ‘L’ system until 1973. According to the agency’s website, they represented a number of firsts for the ‘L’ — the train cars were made of steels, and the doors had electric systems, so that the conductors could open them all at once instead of individually. They didn’t have any air-conditioning, so passengers could open windows. The instructions on the ledges cautioned passengers against sticking out hands and objects. 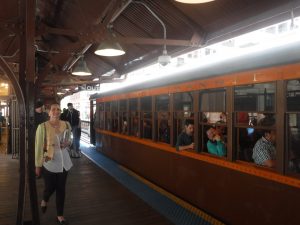 The Quincy station has been restored to be as close to the way it originally looked as possible, making it a perfect setting to board a Series 4000 train. (Photo by Igor Studenkov/for Chronicle Media)

In a noticeable difference from the modern ‘L’ trains, each train car had two sets of doors located at the ends rather than closer to the middle. But the basic seat layout — aisle-facing seats closer to the doors, and forward-facing seats closer to the middle — wouldn’t be out of place on the trains that currently serve Brown, Orange and Blue lines. The CTA decorated the two cars with vintage advertisements from the decades they were in service and older system maps.

The trains traveled slower than the ones that serve the system today — while most modern ‘L’ trains can get up to 55 mph, Series 4000 could only get up to 45 mph.

The CTA also brought out a Series 2400 train. Built from 1976-78, they were the first train cars to have sliding doors rather than doors that opened inward, and those doors were wide enough to accommodate wheelchairs. They were retired from service relatively recently. The CTA started phasing them out in 2013 as the new Series 5000 trains — which were distinct from the previous trains with their aisle-facing seats and fully electronic signs — were brought on. The last Series 2400 train made its final trip on Oct. 31, 2014. 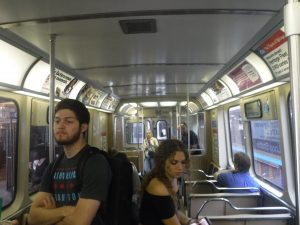 Inside the Series 2400 train. (Photo by Igor Studenkov/for Chronicle Media)

Since then, the train sets that went into the Heritage Fleet were repainted with their original color scheme. When they originally debuted, the mostly silver cars had red, white and blue stripes, as well as red and blue coloring on the front, to mark the then-recent bicentennial of the United States. As with the 4000 series trains, vintage advertisements and system maps were added — in this case, from the 1970s.

The Series 4000 train was tightly packed for the entire trip, with passengers struggling to get on and off. As the train made its way around the Loop, many riders stuck out their cameras and phones to capture the train turning, while the pedestrians tried to capture the view from the ground. 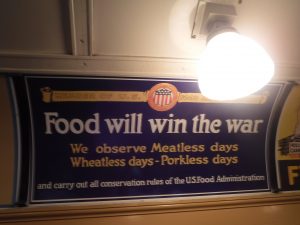 Meanwhile, Series 2400 was much more lightly used. By around 1:20-1:25 p.m., most of the seats were empty, and much fewer passengers tried to board it. But that is not to say that passengers that did use it didn’t enjoy the ride. As the train approached Clark/Lake station, two passengers were looking at the older system map, sharing the memory of the Dan Ryan branch being built and taking the Lake Street train from Austin neighborhood to downtown.

In an official statement, Mayor Rahm Emanuel touted the ‘L’ as an integral part of Chicago’s identity. 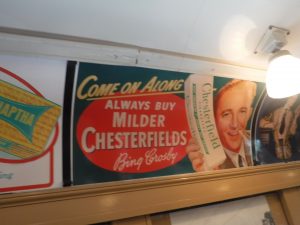 “Few inventions have had such an impact on Chicago as the historic ‘L’,” he said. “Our transit system is the city’s heartbeat that moves us forward. The story of the ‘L’ is the story of Chicago’s innovation and ingenuity.”

Chicago Transit Board Chairman Terry Peterson described the anniversary as another step in his agency’s ongoing progress.

“The CTA is a critical part of daily life in Chicago, providing access to work and education opportunities for Chicagoans across our city,” he said. “We look forward to continuing to serve this great city for another 125 years.”