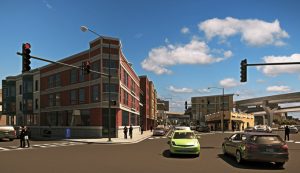 Thomas Tunney knows that for the good of the city, modernization efforts on the Chicago Transit Authority’s Red and Purple lines need to move forward.

However, that doesn’t make it any easier for the city’s 44th Ward alderman, whose residents will be severely impacted by the $2.1 billion first phase of the project.

“This is a huge impact on my ward,” Tunney said. “There are a ton of reasons why this is important for the city, but it is a backyard issue in my ward, with residents adjacent to the properties. “

He said during a public hearing on the rail improvements that property values in the neighborhood are not seeing the bounce that other areas of the city are feeling.

“People have passed on the area. Properties have depressed values,” Tunney lamented.

Sixteen buildings and 22 parcels, many of them in the 44th Ward, will be purchased by the city and razed as part of the project’s $40 million in property acquisition and relocation efforts.

Tunney said the project would increase efficiency on the CTA lines, adding trains and capacity, but have a long-term impact on his area.

“We are looking at 10 years of dust over the length of the project,” Tunney said.

The Red and Purple lines, each nearly 100 years old, would see many improvements through the project, including reconstruction of four of the Red Line’s oldest stations and creating a bypass to unclog an old junction where Red, Purple and Brown line trains intersect.

The project will allow the CTA to increase the number of trains it runs along the Red Line, the backbone of the transit agency with 30 percent of CTA riders. It is expected to relieve overcrowding and meet growing demand for service.

Sylvia Garcia, chief operating officer and chief of staff at the CTA, said that the city is in line for $1 billion from the federal government for the project by providing the matching $1 billion in city funds. The city will generate more than half its share of the project — $622 million — through a transit tax increment financing district.

A TIF District freezes the levies of taxing bodies in a designated area. The difference in taxes paid between the frozen amount and the actual amount goes into a special fund to finance improvements in the area or provide tax incentives to developers.

The transit TIF would run between Devon and North avenues and include parcels within a half-mile east and west of the Red and Purple lines. Unlike a standard TIF that tops out at 23 years, a transit TIF can run for 35 years.

City officials have said that none of the tax money from the transit TIF that would be allocated to the Chicago Public Schools would be diverted from the schools.  Also, while the transit TIF could last for 35 years, city projections call for the TIF to be paid off by 2033.

Garcia said the project will generate work for Chicago residents.

“There will be 5,700 jobs in the construction field generated; and the CTA will make sure that the crews are reflective of the community of Chicago,” Garcia said.