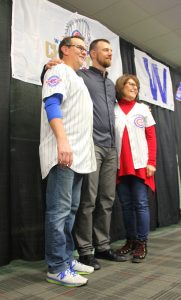 Chicago Cubs second baseman Ben Zobrist enjoys a moment with his parents Tom and Cindi Zobrist at Eureka College for the Pack the Park day in honor of Zobrist on Saturday, Jan. 21. Tom is lead pastor at Liberty Bible Church in Eureka, where the Zobrists raised their five children, Ben, Jessica, Serena, Pete and Noah. (Photo by Holly Eitenmiller / for Chronicle Media)

Wrigley Field in Chicago may be silent from the sounds of baseball, but Chicago Cubs fans continue through the winter to celebrate their 2016 World Series Champions and venerate the players who clinched the championship. 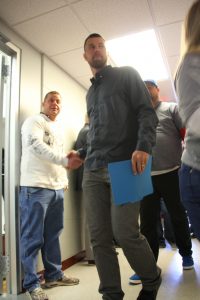 “Look at all that blue!” Illinois State Rep. Thomas Bennett said of the nearly 1,800 people waiting in the auditorium that afternoon for Zobrist’s appearance. “Ben is a great player and he’s a great role model for the community.”

The crowd took to its feet and chanted “MVP! MVP! MVP!” as Zobrist descended the bleachers to meet with college and state officials on stage. Among them, Eureka City Councilman Eric Lind and Eureka College President Dr. Jamel Santa Cruze Wright.

First at the podium was Pastor Tom Zobrist, Ben’s father, who lauded Eureka as a “wonderful place to raise a family and have as a hometown.” Tom and his wife, Cindi, brought up Ben and his four siblings, Jessica, Serena, Pete and Noah there, and Tom is lead pastor of Liberty Bible Church in Eureka. 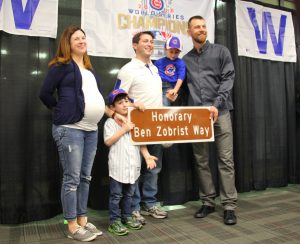 Illinois Senator Jason Barickman, his wife, Kristin, and sons, Augie, 5, and Wally, 4, pose with Chicago Cub and 2016 World Series MVP Ben Zobrist Saturday at Eureka’s Pack the Park, an event hosted by Eureka Events Committee on Saturday, Jan, 21. The day was in honor of Zobrist, a Eureka native. (Photo by Holly Eitenmiller / for Chronicle Media)

Pastor Zobrist prayed, then came the stories; the memories of Zobrist’s earlier years and the retelling of the 10thinning thrill all Cubs fans shared when Zobrist batted in the go-ahead run with a double, setting the stage for the Cubs’ first World Series win since 1908.

“What a year for Chicago Cubs fans!”  cheered Illinois Senator Jason Brickman, who regaled the crowd with an animated play-by-play of the World Series final inning. “The gut-wrenching rain … then to the plate walks this guy from Eureka, Illinois.” 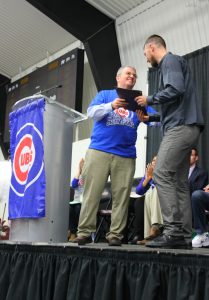 Illinois State Rep. Thomas Bennett on Saturday, Jan. 21 presents Ben Zobrist with a formal copy of Illinois House Bill 1460, congratulating the Eureka native for his performance with the Chicago Cubs as the 2016 World Series MVP. (Photo by Holly Eitenmiller / for Chronicle Media)

Brickman presented Zobrist with one of two “Honorary Ben Zobrist Way” road signs, the second of which is designated to the City of Eureka. Along with the sign, Zobrist was also presented a key to the city and a formal copy of Illinois House Resolution 1406 congratulating the MVP for the championship and his historic career.

A career that almost didn’t happen. “Fifteen years ago, it didn’t look like Ben was going to play,” Zobrist’s former high school coach Bob Gold recalled, “but Ben came to me and said, ‘Coach, I just don’t feel like I’m done playing baseball.'” 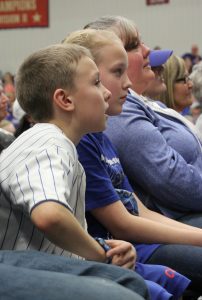 Illinois Senator Jason Barickman amused the crowd at Eureka College’s Christine Bonati Bollwinkle Arena and Convocation Center Saturday, Jan. 21 with his personal play-by-play of the Chicago Cub’s 10th and final inning of the seventh World Series game. “What did Jason Heyward say to you guys during those 17 minutes of rain delay? I don’t know, but God bless Jason Heyward!” (Photo by Holly Eitenmiller / for Chronicle Media)

And the rest is major league baseball history. Much of the dialogue Saturday, however, centered not around Zobrist as a baseball hero, but of Zobrist as a role model, husband and father. Ben and his wife Julianna, a Christian singer, have three young children, Zion, Kruse and Blaise. Julianna performed Saturday night before the Peoria Rivermen game at Carver Arena in Peoria. 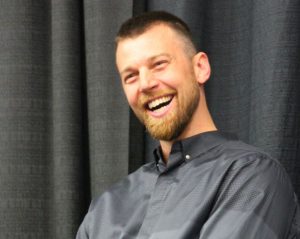 “Would you ever think that a little boy from Eureka would not only be honored here today for what he’s done on the field, but also is so revered by all of us because of the person he is?” Former Eureka Middle School coach Craig Gerdes said. “A ballplayer like this maybe, maybe comes along once in a lifetime. I’m sure glad it was my lifetime.” 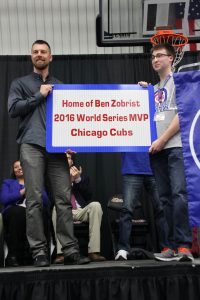 The City of Eureka will post a city sign at its limits to honor native Chicago Cubs MVP Ben Zobrist for his part in leading the team to a World Series championship. Zobrist also was given a key to the city Saturdayat Eureka Events Committee’s Pack the Park event. “Now my kids are going to want to know what this key opens,” Zobrist joked that afternoon. (Photo by Holly Eitenmiller / for Chronicle Media)

Humbled by the fanfare and outpouring of admiration, Zobrist took to the podium with praise for the community and words on his faith. 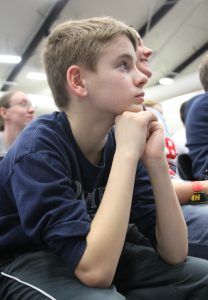 “I’ve become more appreciative of the special peaceful environment and the kind of family community that a town like Eureka can be,” he said. “But I gotta say ‘Thank you’ to God … I’ve always believed He gives us talents, opportunities, successes to glorify Him and really give it back to Him in praise.”