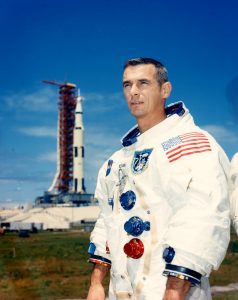 Official portrait of LMP Eugene Cernan in front of the Apollo 10 Saturn V at pad 39-B. (NASA photo)

Despite being one of only 12 men to walk on the moon as an astronaut, Eugene Cernan, as a person, always kept his feet firmly on the ground, according to a local resident who knew him.

“He had a ranch west of Houston and he would talk about his most enjoyable times were being on that ranch doing things. He would dig post holes and make repairs himself. He would not hire someone to do those things. He never lost that part of his personality. He never lost his connection with the common man,” said Bart Benjamin, former director of the Cernan Earth and Space Center at Triton College in River Grove.

A former captain in the U.S. Navy, Cernan flew three times in space, twice to the moon. He also has the distinction of being the second American to walk in space.

NASA Administrator Charles Bolden said in a statement, “Truly, America has lost a patriot and pioneer who helped shape our country’s bold ambitions to do things that humankind had never before achieved.”

Cernan was born March 14, 1934, in Chicago. As a resident of Bellwood, he graduated from Proviso Township High School in Maywood and received his Bachelor of Science degree in electrical engineering from Purdue University in 1956.

Benjamin said Cernan dreamed of being an aviator when he was growing up.

“Space was a Buck Rogers thing when he was young. It was not even on the list of possibilities,” Benjamin said. “His goal was being a flyer and he exceeded that to such a degree that it drew the attention of NASA and he was chosen to be an astronaut.

Cernan did a lot for NASA even as a retired individual, according to the former Cernan Center director. 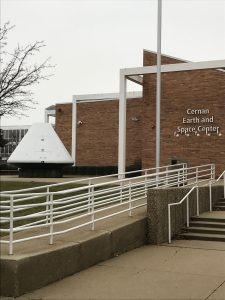 Triton College’s Cernan Earth and Space Center in River Grove is named for Eugene Cernan, who is formerly from Bellwood. (Chronicle Media photo)

“He was always looking to educate the next generation of scientists by telling them the story of what it was like to be on the moon and look up and see the earth,” Benjamin said.

A statement from Cernan’s family said in part, “Even at the age of 82, Gene was passionate about sharing his desire to see the continued human exploration of space and encouraged our nation’s leaders and young people to not let him remain the last man to walk on the moon.”

Cernan made six visits to the Triton planetarium named in his honor and was in his element talking to young people about space, Benjamin noted.

“I’ll always remember how much he loved talking in front of school groups, telling them what it was like to look at the earth,” Benjamin said. “Sometimes his message had almost a spiritual side. He would say that this orb was too beautiful to have happened by accident.”

Benjamin said he also remembers what a good person Cernan was. When the former astronaut came out with his autobiography in 1999, he spent two days at Triton signing copies of his book for the droves of people who lined up to meet him.

“He spent time with each person,” Benjamin said. “He knew that for each person it was a special moment. It took a while for people to get through the line, but he did not minimize anyone’s experience. To his credit, he never griped. He was very patient. He realized his role to play in inspiring people. He supported the space program and supported young people.”

Benjamin, who ran Triton’s Cernan Space Center from 1986 until retiring in 2015, said Cernan never lost his connection with Chicago and the suburbs.

“That is the reason he was willing to come back as often as he did,” Benjamin said. “He was willing to meet and talk with members of the local school communities … He had a middle- or lower-middle-class upbringing. He was not born with a silver spoon in his mouth. He remembered where he came from.” 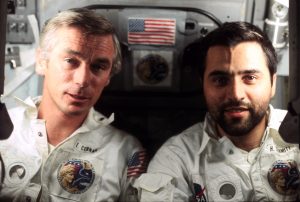 The Feb. 4 Skywatch show at the Cernan Center will be a tribute to the former astronaut, tracing his accomplishments and focusing on his earlier space flight missions.

Benjamin said it was an honor to get to know the American hero.

“I feel blessed to have had the unique opportunity to get to know this man, one of 12 individuals to have set foot on the moon. I got to know him better than most. He was a great man and a good man,” Benjamin said. “His contributions to history and the human endeavor are everlasting. He also had a softer side as a loving, caring individual who loved his family and cared for his community. He was never pretentious. He always wanted to be available as much as time allowed.”

— Former astronaut and Chicagoan Eugene Cernan remembered for his character —