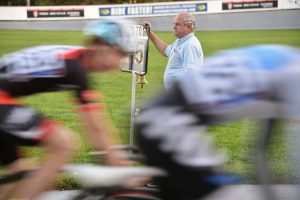 Carl Wilkins, a race official from Kenosha, Wis., is the bell ringer to launch the first race of the season.

Thursday Night Lights are on. The 2016 summer Northbrook cycling season launched May 12 at the Ed Rudolph Velodrome of the Northbrook Park District.

Opening night brought out the cycling community with dozens of riders from the Midwest to the historic velodrome at Meadowhill Park (1479 Maple Ave.).

“Everybody is excited,” said Carl Wilkins of Kenosha, Wis., a race official with a several decade cycling circuit history.

Wilkins rang the bell to mark the start of races. The aroma of evergreens surrounding the velodrome suggested an Alpine and Olympics feel on a cool nearly 70-degree rain-free sunset evening. 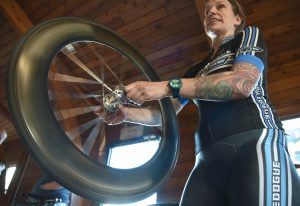 Val Brostrom of Chicago, race director, prepares for the cycling season opener in Northbrook at the Ed Rudolph Velodrome.

The Ed Rudolph Velodrome is one of the bigger tracks in the country, Wilkins said, measuring at approximately a quarter mile. There are nearly 40 velodromes in the United States, he said.

“We’re very lucky to have this,” said Val Brostrom of Chicago, race director. “It’s a sense of community. You make lifelong friends here and stay connected.” 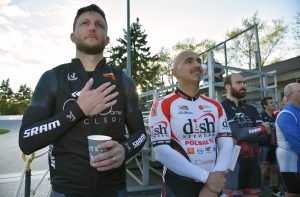 Jeff Whiteman of Chicago (left) and Aram Bayzaee of Northbrook listen to the National Anthem, performed in the stands by trumpet player David Maller of Glenview.

Presented by the Northbrook Cycle Committee, Thursday evening velodrome cycling is a tradition for many. Families come out for sportsmanship and fellowship. 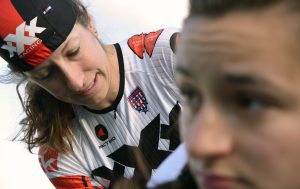 Sue Wellinghoff of Chicago (from left) attaches the race signage of Sophia Escobar of Chicago May 12 in Northbrook at the Ed Rudolph Velodrome, 1479 Maple Ave.

Cyclist Joe Berenyi of Oswego raced May 12. He lost his right arm in a construction accident in 1994.

Berenyi, a 2012 Paralympic Games medalist in cycling, won gold, silver and bronze in London and was 2015 Team USA Paralympic male athlete of the year. 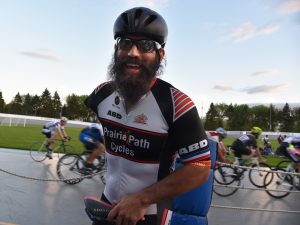 Joe Berenyi of Oswego has just finished his race. Berenyi, a 2012 Paralympic Games medalist in cycling, won gold, silver and bronze in London and was 2015 Team USA Paralympic male athlete of the year.

Berenyi said he was looking forward to the 2016 cycling season.

“I was just waiting for winter to break,” he said, with a smile.

The Northbrook velodrome season runs into September. Spectators pay $2 and children 12 and under are free.

Learn more about Northbrook Cycle Committee and about velodrome cycling at http://www.northbrookcyclecommittee.org.

— Cycling season gets underway at Ed Rudolph Velodrome in Northbrook  —