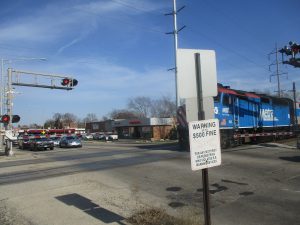 The City of Des Plaines is gearing up to for a study that would determine whether it would be feasible to build a new Metra station on Oakton Street, near the intersection of Oakton and Lee streets.

The city already has two Metra stations — the downtown Des Plaines station and the Cumberland station further northwest, near the intersection of Northwest Highway and Wolf Road. Both stations are located on Union Pacific Northwest Line. The new station would be built on North Central Service Line, which currently passes through the city without stopping.

As the city officials explained to the Chronicle, the new station could encourage economic development in that part of Des Plaines. They also touted the fact that it would provide a convenient link to O’Hare Transfer Station and Chicago Union Station. But they wanted to make sure building the station was feasible before going ahead with the project.

The Des Plaines City Council is expected to select the winning bidder for the study sometime in June. The city expects for the study to be completed by summer of 2019 — at which point, it will determine whether to proceed.

The portion of the North Central Service that run through Des Plaines were originally part of the Wisconsin Central Railroad line, then the Soo line. The line had two stations in the city — the River View station at what is now known as Prospect Avenue and Des Plaines station near Thacker street, only a few blocks from the Union Pacific Northwest downtown Des Plaines station. 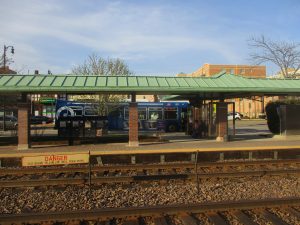 The River View station was discontinued in the early 1930s, while the Des Plaines station lasted until 1965, when the Soo Line ended all passenger service.

According to Metra’s official website, that service was a “very limited” intercity service rather than more frequent commuter service like the kind currently seen on the Union Pacific Northwest line.

When Metra launched the North Central Line, it built new stations in many municipalities the Soo Line used to serve, but Des Plaines wasn’t one of them. And it built an O’Hare Transfer Station.

Contrary to what the name may imply, the station isn’t located in the airport itself. Rather, it’s located on the edges of Chicago’s O’Hare community area. At the moment, the only way to get from the station to the airport is to take a free shuttle bus to Parking Lot E, where passengers can transfer to Airport Transit System, an automated 24/7 train system that links the parking lot with all of the airport’s terminals. But that will change in the next couple of years.

The City of Chicago is currently in the process of building new parking lot facility next to the O’Hare Transfer station. ATS is being extended there, and, once the facility is open, the Pace bus stop at Parking Lot E will be moved there as well, making it much easier to make transfers. 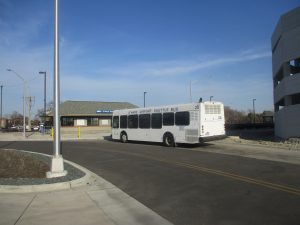 Today, the only way to get from O’Hare Transfer Station is to take a free shuttle bus (pictured at the station) to Parking Lot E and transfer to Airport Transit System. (Photo by Igor Studenkov/for Chronicle Media)

Mike McMahon, the City of Des Plaines Economic and Community Development Director, told the Chronicle that his employer has been considering adding a North Central Service station “for several years.”

“A third, new station would be an economic stimulus to area businesses and provide residents with another public mode of transportation to downtown Chicago and the region’s most significant employment center, O’Hare International Airport,” he said.

Des Plaines residents already have a link to the airport. Pace Route 250 travels between downtown Des Plaines and ATS’s Parking Lot E station, with the trip taking about 20 minutes. According to the system schedules, the trip from the stop at Lee/Oakton intersection — currently the closest stop the potential station site — would take approximately 15 minutes. By contrast, based on the Chronicle’s observations, a trip between O’Hare Transfer Station and Oakton Street takes about five minutes. However, the bus runs more frequently, running an average of once every 20 minutes, while North Central Service runs an average of once every half an hour during rush hours and an average of once every two hours the rest of the time.

The station would also allow Des Plaines residents to make a direct trip to other destinations along North Central Service line throughout Lake and Cook counties. Most notably, it will provide a convenient connection to Rosemont. As previously reported by the Chronicle, during morning rush hour, more passengers get off at Rosemont station than get on, making it a major reverse commuter destination.

As McMahon noted, North Central Service trains terminate at Chicago Union Station, which puts passengers closer to the city’s financial district than Union Pacific Northwest Line’s terminal, the Ogilvie Transportation Center. Riders can also use the Union Station to transfer to seven other Metra lines and all Amtrak routes that serve Chicago.

However, assuming that it would take five minutes to travel between Oakton Steet and O’Hare and the rest of the trip will follow the same schedule as it does now, the local trains on both Union Pacific Northwest Land North Central Service line would actually take the same amount of time to get to downtown Chicago — 41 minutes.

Because Union Pacific Northwest Line has more express trains — including several that skip all stops between the two downtowns — some express trips on that line could be faster. The line also has several other advantages over North Central Service. Because the later has more freight train traffic and fewer tracks to work with — two instead of Union Pacific Northwest’s three — it has less flexibility to add service. That is why there are fewer trips per day, less options in terms of express trains and no weekend service whatsoever. 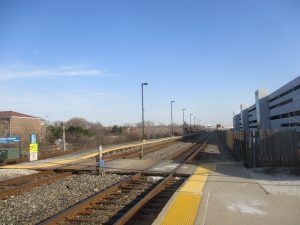 In terms of economic development, a simple walk around the potential station site reveals several shopping plazas to the west and smaller commercial spaces to the east. There are several vacancies on both sides, suggesting that there is room for economic growth.

The tracks curb south of Oakton Street, but they run more straight in the north. And there is a vacant lot at the northeast corner of the spot where the street crosses the tracks, with a parking lot one lot to the east. That could be enough space to put in a station house, or a smaller passenger shelter similar to the one located at O’Hare Transfer station.

The Chronicle reached out Des Plaines Chamber of Commerce and Industry, those offices are located near the intersection, at 1401 E Oakton St. Speaking on behalf of the entire organization, Andrea Biver, the chamber’s executive director, responded that, generally speaking, it believed that access to transit benefits its members.

“The Chamber has not taken an official position on [the issue of adding a third station], but views any transportation enhancement as beneficial to business and residents alike,” she said.

For now, Des Plaines still has to figure out whether the project is feasible to begin with. The city went out to bid on March 14, and McMahon said that the Des Plaines City Council is expected to approve the winning bid in June. From there, it would be completed “by this time next year.”

“If the study shows that a Des Plaines station on the North Central Service Metra line is feasible, the city would then continue coordination with Metra and pursue funding for preliminary engineering on the project,” he said.