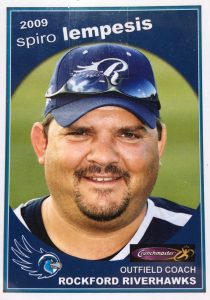 Besides his head coach job at Concordia, Spiro Lempesis spent three summers between 2008-10 as an assistant coach for the minor league Rockford Riverhawks.

In September 2010, Spiro Lempesis was a highly successful and well-respected head baseball coach at Concordia University in River Forest. The winningest coach in Concordia’s history who, in his own words, was “on top of the world and living a dream.”

Seven years later, baseball success is just a memory for Lempesis and his dream has morphed into a nightmare. These days Lempesis finds himself in a quagmire of drawn-out legal proceedings in state and federal courts, an entanglement that eats up his time and may yet send him to prison.

Lempesis says he made some stupid mistakes, for which he says he’s willing to accept the consequences, but he complains that the punishment is greater than his crime. Others say he richly deserves all he’s enduring and more, and accuse him of a sordid pattern of criminally predatory sexual behavior.

Whatever truth finally emerges, there’s no shortage of consequences for Lempesis.

Following a fall baseball practice the evening of Sept. 26, 2010, Lempesis was relieved of his coaching duties and ordered off the campus. School officials padlocked his office and told team members to notify them if they saw Lempesis on campus.

After further investigation, he was fired a week later.

The university declined to discuss the incident with the media, but allegations surfaced regarding inappropriate texts with players and sexual misconduct by Lempesis with a player on the university baseball team, conduct that was rumored to have been videotaped.

Lempesis would later admit that he had behaved inappropriately and “deserved to be fired,” but denied he did anything illegal while head coach, and insisted he was “absolutely not” a pedophile.

The Concordia incident faded from public memory until the summer of 2012. That June, Lempesis was arrested by Elmhurst police after officers found him in the back seat of his car around 2 a.m. with a 16-year old boy.

No criminal charges were filed due to the boy telling police he’d lied to Lempesis, saying he was 19 years old. But the arrest eventually made it into the newspapers. Alarmed by the new incident involving their former employee, Concordia officials retained former federal prosecutor Patrick Collins to conduct a comprehensive investigation into Lempesis’ conduct while at the school.

Collins, who interviewed 70 people and inspected myriad documents during his 520-hour, three-month-long investigation, presented his findings to Concordia in February 2013. Citing “extreme concern that numerous witnesses expressed about preserving strict confidentiality,” the university declined to release the Collins report or even discuss it with the media.

Others weren’t so reticent. In May 2013, the Concordia player with whom Lempesis admitted to having a sexual relationship, Anthony Collaro, filed a civil suit in state court against Lempesis and Concordia. Collaro alleges Lempesis sexually molested him as a high school sophomore and junior on numerous occasions after late evening pitching lessons at Concordia.

Collaro also alleged that Lempesis used offers of assistance in getting drafted by a professional baseball team to coax him to agree to perform sex acts while being videotaped. Collaro, who said he was paid for his participation, said Lempesis told him the tapes were sold to a pornography distributor.

Lempesis has denied the pornography allegation, denied that he abused Collaro in any way as a minor, and denied coercing him in any manner. He called the sexual relationship after Collaro enrolled at Concordia “consensual.” He also said he did all in his power to help Collaro attract scouts’ attention.

“I did everything I could for him.” Lempesis said. “He just wasn’t good enough. It’s as simple as that.”

Two months after Collaro filed suit, Adam Kelly, a former student at southwest suburban Burr Ridge Middle School, where Lempesis worked as a coach and adviser in the 1990s, filed a federal lawsuit accusing him of drugging and raping him repeatedly between 1995 and 1999. Kelly also sued the school district for negligence.

Court filings show that Kelly’s attorneys were prepared to call 23 people as witnesses against Lempesis at trial, including numerous parents, two teachers at the school, and two FBI agents who investigated allegations that Lempesis was part of a pedophile ring operating in the Burr Ridge Area. The D180 school district settled with Kelly in November 2015.

As with the Concordia investigation, the discovery process (fact gathering) in Kelly’s suit disclosed that Lempesis had engaged in numerous instances of inappropriate behavior with his middle school students, including wrestling with a 13-year old boy and giving him a “wedgie,” that is, yanking his underwear up out of his pants.

In a deposition Lempesis acknowledged that, “I have given wedgies to students, yes.” Asked how many times he’d given students wedgies, he answered, “I mean, offhand, I don’t remember all of them.”

Lempesis was terminated from D180 in June 1996 as part of a staff reduction. But minutes from several D180 school board meetings in early 1996 reveal Lempesis was the only tenured teacher dismissed among 10 teachers let go after an education fund referendum failed.

Lempesis has acknowledged the fact that a letter of reprimand was placed in his D180 personnel file for the wedgie incident, but vehemently denied sexually molesting any minors.

While his lawyers bills are being paid by his former employer Concordia, Lempesis’ life has changed drastically. His wife divorced him in 2012, and in 2013 he filed for bankruptcy, losing his house.

Lempesis had a summer job as an assistant coach for the minor league Rockford Riverhawks team between 2008-10. While it appears he may have lost that job due to a change of team ownership, Lempesis found himself exiled from the sport, unlikely to ever coach baseball again at any level.

“I’m definitely an outcast, for sure,” he told this reporter in 2015. He rued his sexual relationship with Collaro, saying he’d been “devastated and destroyed.”

“It’s been all downhill since then. It’s been one thing after another.”

Lempesis has complained in federal court filings of “emotional distress and humiliation” as a result of media coverage of Collaro’s lawsuit. He contends he has endured “relentless pursuit and threats by the media,” which he said caused him to lose time at work and “embarrassment at his place of employment.”

Lempesis did enjoy a rare victory last September, when a judge found Collaro’s attorneys liable for civil contempt for violating Lempesis’ bankruptcy rights by filing a second amended lawsuit in 2014. The federal judge ordered Lempesis be paid more than $75,000 in compensation, including $50,000 in punitive damages from Collaro’s attorneys.

But even in victory Lempesis’ past haunted him. “The Debtor is not an admirable person” the judge said while ruling in his favor. “He admits to conduct that is reprehensible and unjustifiable: sexual contact with one of his players …”

River Forest police investigators concluded that Lempesis’ behavior was more than just unjustifiable. After subpoenaing material from Concordia’s investigative file and conducting their own investigation, they arrested Lempesis at his Rockford home in September 2015, on charges that he sexually abused Collaro when he was 16 years old.

Lempesis spent several days in Cook County Jail before managing to post $20,000 of a $200,000 bond. He was subsequently indicted on four counts of criminal sexual assault of Collaro, and faces between four and 15 years in prison if convicted.

Court proceedings have taken up Lempesis’ time the past several years. He has been present in civil court 20 times since January 2015, and in criminal court more than a dozen times since being arrested, requiring him to drive many hundreds of miles between his Rockford home and Chicago.

There were indications last year that prosecutors are looking at potential additional victims besides Collaro. During an August 2016 hearing, Assistant State’s Attorney Lauretta Froelich referred to potential sexual assault victims in the plural, saying, “there are minors involved in this case.

Froelich told the judge that her office was still working to gather all available evidence for potential use in prosecuting Lempesis, evidence that “includes potential minor victims.”

The morning of Aug. 21, Lempesis once again drove from Rockford to the Maybrook Courthouse in Maywood for a court date before Judge Ginex. After spotting a reporter he’s spoken with in the past, he sent a friendly text.

Asked if he had any comment on how things are going for him, Lempesis texted, “Words can’t describe what I’ve been through and continue to go through. It’s not only what’s happened already, but what I’m faced with for the rest of my life.”

Lempesis’ next court date is Sept. 20.