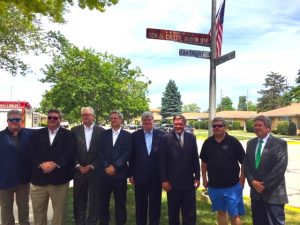 The Durkin Brothers stand under the honorary Westchester street sign recognizing their parents, Tom and Colette Durkin. The brothers are (from left), Bill, Bob, Jim, Pat, Mike, Terry, Kevin and Tom. The Durkin household produced a federal judge, the Republican leader of the state House, a high-profile attorney and five lawyers in all.(Photos courtesy of Jim Durkin)

Look inside a small suburban home and see eight growing boys and a froufrou female French poodle, complete with ribbons, bows and painted toe nails, that would be the beneficiary of the family’s weekly meal of liver as the boys would feed her under the table.

Cut to those eight boys and their mom crammed inside a station wagon with dad smoking a cigar and the windows closed and the air conditioning on as they embark on a family vacation.

A sitcom? No, just life with the Durkins in near west suburban Westchester in the 1960s and ’70s. It was a household that would produce a federal judge, the Republican leader of the state House and a plaintiff’s attorney in high-profile cases, but it was not without its own trials.

“It was organized chaos,” said Bill Durkin, the youngest of the boys. “It was a three-ring circus. We fought, but we made up pretty quickly. It was a simpler time.”

Five of the eight boys would become lawyers and, to quote the late family patriarch, Thomas Durkin, “the other three got real jobs.” The other three became leaders in the insurance, employee benefits and consulting industries.

“It was tight quarters,” remembered Kevin Durkin, an attorney who has represented violinist Rachel Barton, the family of WGN Radio personality Bob Collins and the families of people killed in commercial airline crashes. “There was a lot of fun and a lot of fights. You had eight Type A people who were all fairly aggressive.”

“I remember it being competitive on who would get seconds and thirds,” House Republican Leader Jim Durkin recalled. “It was competitive to the point that there were fist fights at the table over pizza. Our mother, the poor thing — we were not small guys and were all in competitive sports — she had to put food on the dinner table for eight growing boys.”

Eating was a sport itself in the Durkin household,  said Tom Durkin, a United States District Judge.

“We would all grab for food. We would go through one or two gallons of milk a day,” the judge remembered. “It was industrial cooking and eating.”

The senior sibling vividly remembers the liver dinner they would have each week.

“It was a meat my parents may have had during the Depression,” Tom said. “We would wait until they were ignoring us — or we would fake like we were choking — put the meat in our hand and let the dog eat it.” 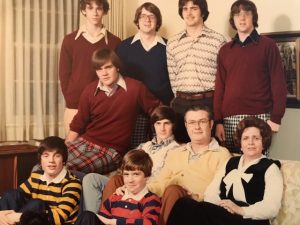 The Durkin family inside their Westchester home.

All eight of the Durkin boys went to Fenwick High School in Oak Park.

“Our father wanted us to have the best in education,” Jim said. “He worked hard. He did not expect us to great straight A’s, but he did expect us to give our best effort.”

Kevin said that their dad, who went to night school to become a certified public accountant, pushed his sons to get a good education.

“My dad did not buy fancy stuff. I look today and wonder how we fit 10 people in that house. My parents could have moved. Rather than get a bigger house and move out of Westchester, education was his and her gift to us. My mom could have said ‘I want a big, fancy house in Hinsdale,’ but my parents were not about material things.”

The eight brothers all live in the Chicago area and still try to get together at least twice a year at Italian Village in Chicago, the same restaurant near where their father was an accountant and would take them for breaking bread and talking with his sons.

“I’m proud of my brothers. They all have great lives and great families,” Tom, the oldest, said. “What is unusual is that we are all still around Chicago. My kids are on opposite ends of the country. All eight of us are in the area. Some of us are in the same town.”

In age order, the brothers are (from oldest to youngest): Tom of Downers Grove, Kevin of Orland Park, Terry of Inverness, Mike of Glenview, Pat of Downers Grove, Jim of Western Springs, and Bob and Bill, both of Riverside.

Tom going into law and working at the U.S. Attorney’s Office may have helped steer other brothers into the legal profession as well.

“We all had different goals growing up,” Kevin, the second eldest, said. “I can’t say that Tom going into law did not have an influence on me. I look up to Tom quite a bit.”

Jim remembers the five brothers that went into the legal profession each considering becoming a police officer at one point. He said when each brother had the idea of going into law enforcement, their dad would arrange a lunch with his cousin, Bill Keating, chief detective of the Homicide Division for the Chicago Police Department.

“He would give us the straight dope on being a police officer,” the state House Republican leader said. “We all decided law school would be a better thing for us.”

He said public service remained a family calling, with Tom becoming a first assistant in the U.S. Attorney’s Office and later a judge, and he and Kevin being prosecutors at 26th and California in Chicago. Jim would get into politics and now serves as leader of the state House Republicans. Bill was recently elected to the Riverside-Brookfield High School District 208 School Board.

“Our family has always had a deep admiration for public service,” Jim said. “It is important to serve the public.”

Bill Durkin said many people assume his run for the R-B School Board was a start in politics like when brother Jim ran for and won a seat on the Triton College Board.

“That is not my intention going into this. That is not my desire,” Bill said. “My kids are still young. I have a business to manage. My time is limited. I am committed to try and do the right thing. I want to make a contribution and do my homework.”

Jim said it was after his election to the Triton Board when his first action item with other new board members was to get rid of the American Express Gold cards for board members that he realized to get things done, sometimes you have to run for office.

“The proverbial light bulb was going off. I realized I could not get involved or follow through, or be part of the solution,” Jim Durkin said. “At that moment, I planned to continue on.”

The House Republican leader said he is not really sure where his brothers all line up politically, saying he believes most of them are “moderate Republicans or conservative Democrats.”

“We have some disagreement on issues, but something we agree on a lot is that we want government to be a place to help people’s futures,” Jim said.

Tom said there was no talk or thoughts of the judiciary or politics for the Durkin Boys growing up.

“My dad assumed we were all knuckleheads,” the federal magistrate said.

As a federal judge, Tom noted, he is no help politically to his younger brother Jim.

“As a judge, I cannot be in politics,” the judge said. “I cannot give campaign contribution. It is prohibited. I can’t go to the fund-raisers. I do not even live in his district so I can’t vote for him.”

Kevin said there is not much legal or political discussion going on when the Durkin Brothers get together.

“We talk more about the garbage that happened growing up,” Kevin said. “We talk about the eccentric neighbors or the weird stuff in our house more than law and politics. There is one character from the neighborhood and all stories lead back to him.

“We tell the stories and the stories get better over time. The kids love hearing them. They become folklore; and they have a 50 percent accuracy rate!”