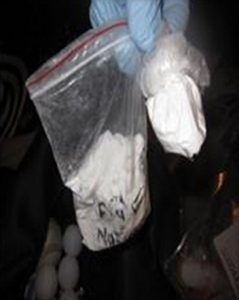 Prosecutors say Rolando Estrada was responsible for the importing and distribution of more than 11 pounds of fentanyl, a synthetic drug 30 to 50 times more powerful than heroin. (Drug Enforcement Administration photo)

An Elmwood Park man wanted on a fugitive warrant for distribution of fentanyl was ordered held by a federal judge this week.

Rolando Estrada fled to Mexico in July 2016 the day after being arrested on multiple charges related to drug possession. An arrest warrant was issued, and last month he was taken into custody in Querètaro, Mexico.

Over the course of a two-year criminal investigation between May 2014 and May 2016, a confidential defendant told federal agents that Estrada was a “multi-hundred gram heroin dealer.”

That same federal investigation resulted in the indictment of 13 people and the seizure of approximately 52 kilograms of cocaine, 45 kilograms of heroin, more than 13 kilograms of fentanyl, and methamphetamine.

After being alerted to Estrada’s activities, agent’s suspicions were heightened when they reportedly discovered that Estrada, who had no discernible source of income, was making wire transfers totaling $33,500 to a Chinese chemical company.

On June 22, 2016, postal agents interdicted two packages from China containing fentanyl that was mailed to known associates of Estrada.

According to the criminal complaint against Estrada, on July 13, 2016 agents observed Estrada place a backpack into the back seat of a friend’s car in the 2100 block of North 75th Court in Elmwood Park.

Prosecutors say Estrada told the agents there was six kilograms of cocaine and $90,000 in cash in a closet at the North 75th Court residence, and signed a written consent for a search.

The criminal complaint does not explain how or why Estrada was released, but the next day agents were unable to contact or locate Estrada. After calling to the U.S. Customs and Border Patrol they learned that Estrada had fled to Mexico on a commercial flight.

Estrada was mentioned in the July 27, 2017 DEA press release announcing the indictment of 13 people related to the massive fentanyl, heroin and cocaine distribution operation in Chicago and its near western suburbs.

Estrada is also well known to Elmwood Park police. In April 2015, he and another man were arrested for the armed robbery of a postal worker, and for operating a marijuana grow house in a nearby Chicago neighborhood.

Estrada is facing a maximum of life in prison if convicted on the federal charges.