Neringa Zymancius and other members of the Stop Sterigenics citizens group call on U.S. Environmental Protection Agency officials to take action action against Sterigenics, a medical supply sterilization company in Willowbrook, and not just monitor its emissions. “We are not your guinea pigs,” Zymancius said. (Kevin Beese/Chronicle Media photo)

Jacquie Harding believes living in the footprint of a sterilization company’s air emissions played a role in her being diagnosed with pancreatic cancer three years ago.

Harding, who was a senior manager with the federal government for 37 years, said finding a house in La Grange in 1989 may have been the worst thing for her health. She said years of breathing emissions of ethylene oxide, a known carcinogen, from Sterigenics, a sterilization company in nearby Willowbrook, took a toll on her health.

“The timing makes it more than a coincidence,” Harding told the Chronicle following a U.S. Environmental Protection Agency community forum Thursday (Nov. 29) in Willowbrook about Sterigenics. She believes that nearly 30 years of breathing in emissions from the sterilization company led to her cancer diagnosis in 2015.

She said many friends living near her in the Southwest Suburbs have been stricken with forms of cancer as well.

During a panel discussion during the forum, Harding spoke out from the audience, urging residents to remain vigilant in seeking answers about the Willowbrook company’s emissions.

“We need to get the information from somewhere,” she said. “… We just need accountability. When you go to people and find out they have cancer, this is crazy.”

A Willowbrook woman, who spoke to the Chronicle on the condition of anonymity, said she has had continual health problems since moving into the area in 1990. She said she was diagnosed with adult asthma three years ago as well as mitochondrial disease, where mutations occur in cells and mitochondria fail to produce enough energy for the body to function properly.

“That does not run in the family,” she said of mitochondrial disease.

Fearful that identifying herself could impact her employment opportunities, the woman said that members of her family have all been diagnosed with allergies in recent years.

“They did not have anything before,” the Willowbrook resident said. 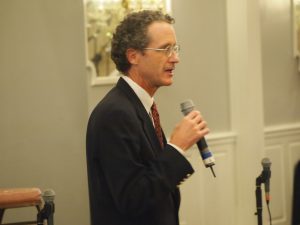 William Wehrum, assistant administrator of the U.S. EPA’s Office of Air and Radiation, said that the agency will continue to check air emissions coming from Sterigenics in Willowbrook. . (Kevin Beese/Chronicle Media photo)

The top air quality official in the country said the federal government is going to continue testing in and around Sterigenics’ two facilities in Willowbrook. William Wehrum, assistant administrator of the U.S. Environmental Protection Agency’s Office of Air and Radiation, told residents said that the process has started to monitor emissions from Sterigenics, but that the process will take some time.

Mike Koerber, deputy chief assistant for the EPA’s Office of Air Quality Planning and Standards, said that it was late summer when agency studies revealed that ethylene oxide is 60 times more powerful than originally thought. That put the release of the chemical at Sterigenics and other medical equipment sterilization firms around the country in the spotlight, he said.

“Ninety days ago, we changed as a village,” said Willowbrook Mayor Frank Trilla. “We were informed that there was something here that we were never aware of.”

“All I want to know is are my people safe? Were they in danger before (government officials became aware of the emissions); and will they be in danger in the future?” the mayor asked.

Members of the citizens group Stop Sterigenics gave an impassioned plea for the EPA to take action against the company and not simply test and monitor emissions from its plant.

Zymancius said the EPA must be diligent in assuring that the sterilization company is compliant with all rules regarding emissions and that residents in the Southwest Suburbs are safe.

She also sent a message to leaders of Sterigenics.

“We will not stop until you are gone and leave our community,” she said as residents in the audience stood and cheered.

In a statement distributed at the community meeting, Sterigenics officials said that the August report from the Agency for Toxic Substances and Disease Registry touched off months of confusion, political fear mongering, lawsuits and even threats of violence against Sterigenics employees.

“Despite the face that the report has now been rendered invalid based on the EPA’s acknowledgment that the test samples were flawed, Sterigenics and the Willowbrook community have been unfairly stigmatized.”

“The system has failed the citizens of Willowbrook by allowing flawed data measured against an illogical standard to be accepted as fact,” the company said. “The real travesty has been the needless fear and worry about safety that good people of Willowbrook have had to wrongly endure.

“Overlooked in all of this is the fact that companies like Sterigenics have voluntarily invested millions of dollars in emissions control systems and processes to ensure public safety. Independent tests confirm that these systems are working, enabling Sterigenics to capture and control more than 99.9 percent of the EO used at the Willowbrook facility before its conversion for safe reuse. In other words, less than one-tenth of 1 percent of EO used is released into atmosphere – one of the highest control levels in the country for the industry.”