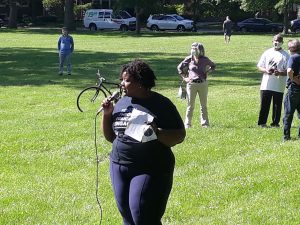 Tiffani Holmes of Organization for Positive Action and Leadership talks to people gathered June 8 in Evanston’s Ingraham Park to call for an open process in selecting a new city manager. After the rally, Evanston City Council members decided to continue to search for a new manager rather than appoint the acting city manager to the post. (Kevin Beese/Chronicle Media)

Evanston will keep doing a national search for a new city manager at the request of the person who was in line to take the post.

Interim City Manager Erika Storlie was just a City Council vote away from being permanently placed in the position, but told council members she felt a search should be conducted.

“Public process is something I value,” Storlie said at the June 8 council meeting. “I have been here for 16 years and know that public process and public participation is at the core of Evanston and who Evanston is.”

The Evanston council was poised to vote at the meeting on bypassing the search process and making Storlie the permanent city manager.

However, some residents had expressed opposition to the move, recommended by Mayor Stephen Hagerty. They contended that a national search should be done to ensure the city gets the most qualified person available.

A group of residents had shown up at Ingraham Park across from the Lorraine H. Morton Civic Center just hours before the council meeting was to begin to lobby for the city manager search process. They honked their car horns and held sign in the open space near City Hall demanding that their voices be heard throughout the hiring process.

After Storlie’s statement to council members, they opted to remove her hiring from the meeting agenda.

At a Rally to Restore Democracy held before the council meeting, members of the Organization for Positive Action and Leadership said they wanted the City Council to keep its promise and allow for public input in the hiring of the new city manager. 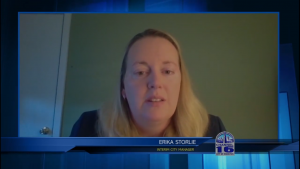 Acting City Manager Erika Storlie tells Evanston officials that the hiring of a new city manager should be a “public process.” (Screenshot of City Council meeting)

“The position of city manager is the most prominent in Evanston under its form of government,” CABG reps said in a press release. “The hiring process is significant and should be inclusive.”

More than 350 Evanston residents had signed a petition calling for the city manager search to continue.

“This is a very important topic,” Tiffani Holmes said during OPAL’s rally in Ingraham Park. “… This is far from the open process that has been created for the City Council.”

Holmes said Hagerty and the council had argued that COVID-19 was hampering the search process. She argued that the coronavirus pandemic is a reason to continue with a national search.

“With unemployment over 10 percent there’s got to be some good candidates out there,” Holmes said. 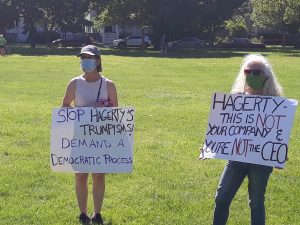 She said virtually interviews can be done over Skype and other platforms and that the coronavirus should be not used as an alibi.

“We need to hire the most qualified candidate,” Holmes said.

Oliver Ruff, a leader of Community Alliance for Better Government, said the council was sidestepping the planned search process by looking to hire Storlie.

“They have not been transparent through the process,” Ruff said. “They are not seeming to want to go through the candidacy process. The candidate chosen should be totally vetted.”

Fourth Ward Alderman Donald Wilson made the move to withdraw the special order to make Storlie the city’s manager.

“It is respecting both the process and what she is proposing,” Wilson said.

“It’s where the city manager search process should be discussed,” Rainey said. “There wouldn’t be such chaos if we had done that in the first place. Look at our city history. (Hiring a manager) is a very smooth process.”

Ninth Ward Alderman Cicely Fleming said the city’s human relations firm should brief members of the Rules Committee on the search process and what the nation climate for hiring city managers is.

“With City Manager Storlie’s contract expiring, it is better if we start sooner rather than later,” Fleming said.

Third Ward Alderman Melissa Wynne said the hiring process should be put on a fast track after Storlie’s appointment to the post was tabled.