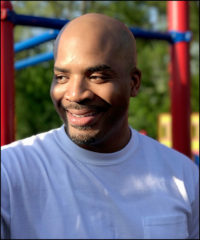 A fallen Dolton firefighter will be remembered this weekend (Oct. 6-7) at a national memorial.

Tribute will also be paid to 23 firefighters who died in previous years.

Matthews died after collapsing while assisting during a fire at a mobile home park in Harvey. He had served on the Dolton Fire Department since 2009, and is survived by his wife and four children.

Dolton Deputy Fire Chief Don Rush remembered Matthews as always being willing to make public appearances on behalf of the department, such as for fire-prevention sessions.

“He was always the first to make contact with the public,” Rush said of Matthews. “We went to a school for a drill and there were children outside during recess playing football. Lawrence went and joined in with them. That’s the kind of person he was.”

Rush remembered Matthews as “a well-rounded family man who cared about the community and the work he did.”

The deputy chief said he had many conversations with Matthews about family and life.

“The more I spoke to him, the closer I got to him,” Rush said.

Although Matthews was on light duty due to medical issues, he has been cleared to return to work and fight fires, Rush said.

“He could not wait to go back to firefighting,” he noted.

Matthews was in training to drive fire trucks at the time of his death.

The Dolton firefighter had been close to his mother, Rush said, and took care of her until her death earlier in 2017.

Matthews died just days after celebrating the 10th anniversary of his heart transplant.

Rush said he has been to tributes for Matthews at the Illinois Fallen Firefighter Memorial in Springfield and the Champaign Fire and Police Memorial, but was unsure, when he talked with the Chronicle, if he would be attending the Maryland ceremony.

The deputy chief said he would see Matthews’ red coffee cup and know he was somewhere nearby.

“He really had a mighty voice. I called it ‘a roar,’” Rush said, “but he was a pussycat, to tell you the truth.”

Rush said it still hits him hard more than a year later that Matthews is not part of the department.

“He is really missed,” Rush said, noting that his own son is the same age as Matthews.

There is a plaque at the Dolton fire station in tribute to Matthews. There is also a street in the village named in his honor.

At the national memorial, the names of Matthews and the other fallen firefighters will be read as their families receive an American flag that has been flown above the National Fallen Firefighters Memorial and the U.S. Capitol. Family members will also be presented with a red rose and a personalized badge. During the ceremony, a bronze plaque bearing the names of the fallen will be officially added to the memorial.

The service begins at 9 a.m. (Central Daylight Time) Oct. 7 at the National Fire Academy in Emmitsburg. The firefighters will also be remembered in a candlelight service at 5:30 pm. (CDT) Oct. 6 at the same location.

“Memorials are created so there will always be a special place to remember and honor our loved ones. In 1981, the National Fallen Firefighters Memorial was created to pay tribute to these men and women who made the ultimate sacrifice,” said Dennis Compton, chairman of the National Fallen Firefighters Foundation Board of Directors. “Everyone who visits the memorial pauses to not only honor the fallen firefighters, but to also honor the strength and courage of their loved ones.”

Members of the Congressional Fire Service Caucus will present 103 American flags that were flown over the U.S. Capitol to the NFFF during a ceremony at 9:30 a.m. (CDT) Oct. 4 in the Kennedy Caucus Room of the Russell Senate Office Building. The flags will be displayed in the National Fallen Firefighters Memorial Chapel until the memorial service on Oct. 7 when they will be presented to the families.

More than 5,000 people, including family, friends, firefighters, members of Congress and administration officials are expected to attend the Oct. 7 service. Firefighter honor guards and pipe & drum units from across the United States will participate in the national remembrance.

NFFF will provide a satellite feed and streaming of ceremonies along with video of events for downloading, courtesy of VISTA Worldlink.