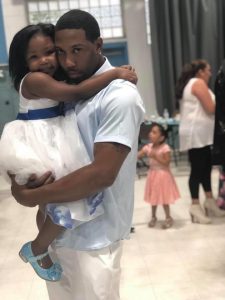 Ashley Scott was supposed to start a family vacation with Curtis Hale-Melton on July 10.

Now that will be the day that Scott buries her former partner.

Hale-Melton, 31, of Maywood, was killed on Father’s Day when he was being a good Samaritan and trying to rescue individuals hurt in a rollover crash on the Bishop Ford Freeway at the split between the express and local lanes south of 47th Street in Chicago.

Both drivers — Sabrina Johnson, 45, of Chicago, who allegedly hit Hale-Melton, and Francisco Carreno Jr., 34, of Chicago, who was the alleged driver in the rollover crash — were charged with driving under the influence of alcohol in connection with the incident.

“It’s beyond frustrating,” Ashley Scott said of the two drivers charged with being under the influence. “It’s the part that hurts the most. Curtis went to render aid and was the only one not to walk away.”

Two Chicago men — Ezekiel Williams and Corey Seifer, both 25 — were in a different vehicle and stopped to assist as well. Both Williams and Seifer were seriously injured when allegedly hit by the 2017 Nissan Sentra driven by Johnson but recovered.

Carreno and the four passengers in his car — Melisa Camacho, 34; a 13-year-old boy; an 11-year-old girl; and a 9-year-old girl, all of Chicago — were taken to a local hospital with non-life-threatening injuries, Illinois State Police said.

“It’s beyond heartbreaking,” Ashley Scott said of the accident. “It makes me sick to my stomach. There were kids in the one car.”

Scott said she drove the Bishop Ford Freeway the other day for an hour.

“I was trying to figure out how a person could not see an overturned vehicle and people. This has been the worst thing in my life that I’ve ever had to deal with,” said Scott, who also lost her brother two weeks ago.

Scott, who had a daughter with Hale-Melton, said the Maywood man was a huge part of her family.

“Even my mom now is still not right,” Scott said nearly a week after the accident. “He’s family. My mom was not as heartbroken when she lost her brother. She’s devastated. My brother, our friends are all hurting. I contacted the State’s Attorney’s Office. I want this woman to know what she took from us. We lost a great man.”

Scott and Hale-Melton’s daughter, Yolanda, was the apple of his eye —the first of two girls he fathered, his former partner noted.

He planned to paint his hair green and his face white to be the Joker for his daughter’s fifth birthday party in July.

“He was willing to do anything for her,” Scott said.

She said the family’s loss will be lingering.

She noted that her former partner, who she knew for 11 years, was overprotective of his daughters.

“He would say ‘She is not going to prom without me,’ ” Scott said, referring to Yolanda, named after his mother. “I know her first day of school he would be the one peaking in the window. I looked forward to her driving him crazy.”

Scott said the bond between Curtis and his daughter Yolanda was instantaneous.

“When they were cleaning her up after being born, he was right behind the nurse like a hound,” she said. “He never moved from the spot.”

Scott remembered Westlake Hospital nurses switching her and Yolanda to a different room so Curtis could be more comfortable when holding Yolanda.

“I’m like ‘Can I get some orange juice?’ and they’re like ‘We’re switching you to a different (room) to make sure you are all comfortable.’ ”

Scott said Curtis, who fathered eight children, was over the moon when his first girl was on the way.

“I remember how happy he was. I walked in the Bellwood McDonald’s (where he was a manager) and told him I was having a girl,” she said. “He dropped somebody’s order and ran around the counter and grabbed me so hard. He was like ‘Are you playing? Don’t play with me.’ I had to say I was not. He wasn’t able to go to the doctor’s appointment with me that day because someone called in and he had to cover for them. He had to remake the people’s food.”

Yolanda Hale, Curtis’ mother, said her only son loved cooking and being with family.

“We did not always get along. That was the way we were, but we always overcame our differences,” she said.

Both Hale and Scott said the fact that Curtis died trying to help others did not come as a shock to them.

“That was my son,” Hale said. “He’s always been a humanitarian. He would see someone in need and help them no matter what. That has always been him.”

“He was a protector,” Scott said. “If my mom needed something, if anyone needed help, he was there.”

She said knowing that there were kids in the overturned vehicle, it is not surprising that Hale-Melton tried to help.

“Kids meant everything to him. He would do whatever he could to get those kids out of the car,” Scott said.”

She said even his employees at McDonald’s relied on him for protection and support.

“Whatever he could do to help, he would do,” Scott said. “He would help people move at 7 or 8 in the morning, even if he worked the night before.”

Scott said her former partner was a person with a big heart.

His mother noted that her son did not live the perfect life, having some issues, including a drug arrest, “but he tried to change his life, especially after his first daughter was born.”

Yolanda Hale labeled her son a “family-oriented man,” who leaves behind six boys and two girls ranging in age from 6 months old to 13.

Ashley Scott said she had to cut Curtis’ phone off because their 4-year-old daughter continued to call the number wanting to talk to him.

She said it was not out of the ordinary for Curtis to have his daughter on Facetime telling him about her day while he handled orders in the drive-through. Yolanda would run into McDonald’s to be with her dad, jumping into his arms and then be running around the back of the fast-food restaurant while her father worked.

“That man, in her eyes, could do no wrong,” Scott said. “We would go to the movies together after we separated and I would be expecting Yolanda to leave with me and she would say, ‘You know I love my daddy’ and leave with him.

“Even at Parent Day at school, he came for the last hour because he had to work and she was like, ‘Everybody, this is my daddy.’ I’m like, ‘What about my entrance?’ He would just crack up. He loved that.”

Hale-Melton grew up in the Cabrini Green public housing complex in Chicago (as did Scott) and had been through a lot in his young life, including being shot in his early teens.

Scott said she does not know how she is getting through each day, but she knows she must.

“I’ve got to be strong for my baby. I have to help her get through this,” Scott said. “I just don’t feel like this is real. I don’t know how I’m functioning right now. I feel like it’s an out-of-body experience. I never thought I would have to pick out his casket and burial site. I thought we would be doing it when we were 80 or 90 years old, not right now.”

A GoFundMe page has been created to help the family. It can be found at https://www.gofundme.com/f/curtis-hale-melton-memorial-fundraiser.