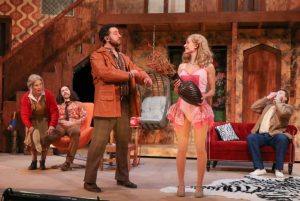 “Noises Off” plays at the Metropolis Arts Centre, 111 W. Campbell Street, Arlington Heights through March 14. Tickets are $40. To buy tickets, and for more information, call the box office at 847-577-2121 or visit www.metropolisarts.com.

Hungry for something a bit different than the usual theater fare? “Noises Off,” the current production at Metropolis Performing Arts Centre, in Arlington Heights, may be just the thing to satisfy that appetite.

This farcical show-within-in-a-show, staged in three acts, debuted in London, in 1982. During Act I, the audience watches a traveling troupe of actors (cIrca 1974) rehearsing for a fictional British comedy, “Nothing On,” on the eve of the show’s opening night. But the actors are struggling, and the dress rehearsal doesn’t go well at all.

The stage then revolves 180 degrees for Act II, revealing the backstage area as “Nothing On” is performed on the opposite side.

“In Act II, you see various jealousies and rivalries developing while they’re still trying to put on a show,” explained “Noises Off” director Joe Lehman.

Act III sees a return to the original set, with the audience viewing a performance of “Nothing On” fraught with comedic mishaps because of the behind-the-scenes conflict that includes love affairs gone wrong, ego battles and other personal issues.

“Problems start to accumulate faster than they can solve them,” Lehman said. “By this time, the audience is in on all the jokes and jealousies. It’s the payoff of everything building up in the first two acts.”

The biggest challenge, Lehman said, “is getting the backstage to spin around and not lose momentum during that 10-minute break. It’s an additional treat for the audience to see the spinning, but a lot of technical things have to go right for the set to work.”

“We’re so fortunate, everyone is top-notch talent from the Chicago area,” Lehman said. “It’s an ensemble-based show, so everyone is dependent on everyone else doing the right stuff. Also, they’re playing an actor who’s playing an actor in a different show. You see glimpses from ‘Nothing On’ characters to ‘Noises Off’ actors.

“It’s very demanding for the actors. You have to be capable of all types of comedy — and be a physically adept actor — to distinguish between the characters. It’s really challenging — physically and verbally, and emotionally you get involved, too.”

Keefe said, “The show has so many layers of dramatic conflict. Many of the actors have to play the roles as if they’re not very good actors. And the physicality of the show. Every cast member is involved in catching something or throwing something. So the level of intricacy with this show demands not only good actors but actors who can also endure a bit of cardio workout.

“There’s a high level of concentration required. Plates and sardines are thrown in the show … slamming doors. The timing has to be spectacular, and these actors do it so seamlessly. Your role isn’t necessarily to draw attention to yourself, but to make everyone else around you better. This cast, they’re really shining examples of that.”

Cast member Rian Jairell, an Evanston resident, plays Frederick Fellowes, who portrays the character Philip Brent in “Nothing On.”

“I was excited about getting the role,” said Jairell, a veteran of several Metropolis shows, including “Mousetrap” in 2019. “Fellowes is kind of an insecure man, a little oblivious, and his wife just left him. He plays Philip (facing tax evasion problems), and the action in ‘Nothing On’ takes place in Philip’s house, in Spain.”

A madcap chain of events ensues, including a sticky plate of sardines, Philip’s pants falling off and a lost contact lens. Meanwhile, Fellowes has the tax issues on his mind, among other concerns related to his fellow “Nothing On” cast members.

“It’s a lot of fun,” Jairell said. “When you play one role, that’s all you have to focus on — how they walk and talk. Whereas here, you’re playing an actor playing another character. So the challenge is finding two different voices.

“Here’s Freddy (Fellowes), insecure, a little dim, a clueless type. So I wanted to go extreme with Philip. The idea we’re sneaking around the tax people … being bad and we like it. You want to make sure it resonates. You hope the audience can see the change from Philip to Freddy.”

“Noises Off” opened at Metropolis on Jan. 30 and continues its run through March 14. Lehman said audiences have grown larger since the opening, along with the volume of laughter.

“I’m very pleased so far,” he said. “Crowds are good, and we’ve gotten some positive feedback. Word of mouth has been strong, too. In terms of the performances, I think there’s been a kind of natural maturation process. You can refine certain moments with the timing in comedy … a little different every night to kindle that fire within the audience.

“That’s the art — to get the audience going and allow for those responses, and it’s definitely grown since the opening. It is a team and collaborative endeavor. Mesh together and focus on the same goal.”

Keefe cited Lehman’s directorial skills as being a key factor in getting “Noises Off” off the ground and running.

“The foundation is set in rehearsal,” Keefe said. “And Joe (Lehman) has an innate talent for putting the actors in the best position to connect emotionally in each other. That momentum carries forward and builds throughout the entire production.”

Added Jairell: “I’m a craft guy … how you build it and how it works with the audience. The play is inherently funny, but you have to go in and work to make it all work. And as the show keeps going, everything is coming together. Now it’s running like a well-oiled machine.”