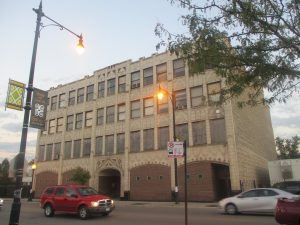 The State of Illinois’ three-year budget impasse brought Metra’s plans to build three new stations throughout Chicago suburbs to a standstill. But the passage of 2017 budget didn’t resolve the issue.

The plans for the Village of Romeoville station ultimately went ahead without state funding. Meanwhile, the fate of the city stations remains uncertain. According to Metra speokesperson Michael Gillis, there is funding for the Peterson Ridge station, but Metra is yet to actually receive it. Meanwhile, the funding for Auburn Park station remains frozen, leaving the project in the same limbo as before.

Every single commuter train line in Chicago area originally had more stations than they do now. Neighborhood development was driven by access to rail lines, which provided faster, more reliable commute than horse-drawn transportation. But as the interstate highway system was built and car ownership increased, ridership dropped. By the late 1950s, many of the stations have closed, and other stations closed decades later.

The three new stations would not, strictly speaking, be replacements for the stations that closed. The locations are different — but they are close enough to the previous locations to serve the same purpose.

Romeoville was originally served by the Atchison, Topeka and Santa Fe Railway line, which had a station called Romeo at 135th Street, near the Illinois and Michigan Canal. All passenger service on the line was discontinued in 1971.

The Chicago, Alton and St. Louis Railroad, while is located a little farther east, had some commuter service running between Chicago and Joliet, but it didn’t stop at Romeoville. When Metra took over, it increased service to make it a rush hour commuter line, but it didn’t add any stations. Romeoville residents had to travel to either Lockport or Lemont stations. 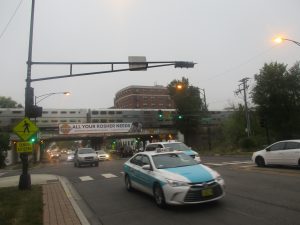 The situation began to change in 2008. Citgo Petroleum Company was looking to expand its plant at 135th Street, and it wound up striking a deal with the village — in exchange for getting some zoning variances, it agreed to lease out an eight-acre piece of land at the southwest corner of 135th Street and New Avenue for a symbolic $1 a month for 99 years.

In 2012, the Romeoville Village Board approved the Romeoville East Side development plan, which included the new Metra station. The plan called for it to include a brand-new depot building, two platforms, and a 373-space commuter parking lot with a bus drop-off. According to the Metra 2013-2017 capital project plan, Metra would build the platforms, while Romeoville would pay for everything else. The project required $2 million in state bond funds.

The line currently known as Union Pacific North Metra Line serves much of Chicago’s North Side, with the section between Foster and Devon avenues acting as a border between Edgewater and Ravenswood neighborhoods. In the past, that section of the line had three stations — Summerdale, Rosehill and Kenmore — but all of them have since closed. Today, the closest Metra station to Edgewater is the Ravenswood station, which is located south of Foster Avenue, near Edgewater’s southeastern edge.

Much of the surrounding neighborhoods currently fall within the 40th Ward. Chenin Kienzler, Ald. Patrick O’Connor’s (40th Ward) chief of staff, told the Chronicle this was something her boss has been advocated for the past 20 years. In a statement posted on the ward’s official website, the alderman said that the station would be a great transpiration asset for the surrounding communities. 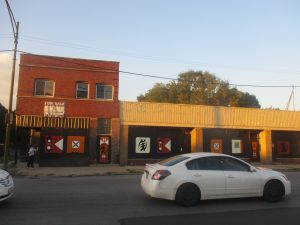 “It’s going to be a really nice opportunity for folks in our neighborhood,” he stated. “And it’s one of those deals where it’s going to enhance property values throughout that part of the neighborhood. Because instead of having to take two buses to get down to the [Red or Brown ‘L’ lines], you’re going to be able to get on the Metra and be downtown in about 15 minutes, which will be really nice.”

Metra itself billed the project as a way to reduce overcrowding on both the Ravenswood station — one of the busiest stations on the entire line — and the Rogers Park station further north.

Peterson Ridge station would be located in between the two avenues that gave it its name, a few blocks north of the Rosehill station. According to the preliminary renderings, there would be two platforms on each side, with a small station house build on the east platform near Peterson Avenue. The currently vacant land would be turned into a small parking lot.

According to the 2013-17 capital plan, $5 million of the project’s $15 million budget would come from state bonds. Then-state Rep. Harry Osterman, who has since become alderman of the nearby 48th Ward, helped to secure additional funding. 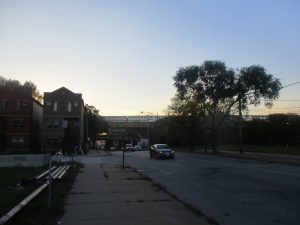 Finally, on the South Side, the Rock Island District Line runs between Chicago and Joliet, serving parts of the South Side and suburbs farther south and southwest. It has only one station in Auburn-Gresham neighborhood — the Gresham station, which is located above 87th Street, in between Halsted Street and Vincennes Avenue. In the past, it had another station at northeastern end of the neighborhood. Known as the Auburn Park station, which was located at the northwest corner of 78th Street and Fielding Avenue. It was closed in 1978.

Carlos Nelson, the executive director of Greater Auburn-Gresham Development Corporation, grew up near the former station. He recalled growing up watching the trains pass by, and he became determined to do something about it.

As far as Nelson was concerned, there was a simple reason why the original Auburn Park station closed.

“[The station was open] during the time that this community was 98 percent caucasian,” he said. “And as the ethnic transition, ethnic succession began to occur in ’60s and ’70s, that train station was vacated. And now this community is 90 percent African-American. And we’re saying that, hey, there’s inequity.”

Nelson noted that, for example, the Rock Island District Line’s Suburban branch, which primarily serves Chicago’s Beverly and Morgan Park neighborhoods, has multiple stops both neighborhoods —and none of them have ever been eliminated. 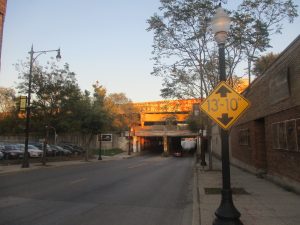 Current plans call for the new Auburn Park station to be built at the top level of the two-level railroad bridge crossing that passes over 79th Street. (Photo by Igor Studenkov/for Chronicle Media)

Nelson also told the Chronicle that the Metra station the neighborhood did have had plenty of shortcomings.

“Gresham — that’s not a station,” he said. “It’s not a place where people can congregate. It’s not welcoming. Its secluded.”

In 2004, GAGDC began pushing for a new Auburn Park station in earnest.

“[We spent] 10-12 years working diligently, assertively, with Metra and with elected officials and other transpiration agencies to get the station open,” Nelson said.

As he explained, the station would be located at the spot where two separate sets of tracks cross 79th Street, with a freight line running at a viaduct right above the street and the Rock Island District running right above that. The platforms would be built above the crossing, with exits leading to the southeast corner of 79th Street.

“[The station] will become a hub of commerce, a hub of activity,” he said. “It’s very important [that] the design of the station is that it’s part of community, so it doesn’t have its back to the community”

In fact, as Nelson explained, CACDC wanted the station to become part of economic revitalization of the surrounding stretches on 79th street. Another major part is their effort to rehabilitate and renovate a four-story vacant building four blocks west of the crossing, at 839 W 79th Street. Nelson explained that, when it opens, the newly dubbed Auburn-Gresham Healthy Lifestyle Building will have a health center, a fitness center, a coffee shop and spaces where the community residents can meet. 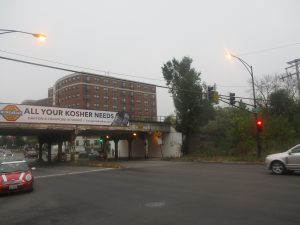 Aside from that, the organization is also working to add housing, support businesses that are already near the crossing, encourage businesses to open in spaces that are vacant, and spruce up sidewalks and streetscaping.

GASDC is hoping to create economic growth that would result in jobs that pay more than minimum wage. As Nelson explained, they feel that such jobs would help the community on the long run.

“[We want to create] 100-150 living wage jobs,” he said. “And the living wage meaning their salaries will allow them to purchase homes in the community, some of the beautiful brick bungalows and two-flats. They will be able to shop in some of new businesses and existing businesses that will be around that train station.”

Having a station, Nelson explained, would benefit local residents and allow people who live along the Rock Island District Line to take advantage of the new job opportunities.

The station has the largest budget of the three — according to Regional Transportation Authority, it is expected to cost $21.5 million. 2013-17 capital plan indicates that $11.5 million of that would come from state bond funding. Illinois state Sen. Jacqueline Collins (D-Chicago), whose district includes Auburn-Gresham, helped to secure additional funding.

However, the budget stalemate left all three projects in limbo. While some funding was coming in, it wasn’t enough to get the project off the ground.

In April 2017, Metra announced that it received $56.4 million in state bond funds, and that it chose to primarily spend it on railcar and locomotive rehabilitation. At the same time, it announced that Romeoville project was proceeding without bond funds. Instead, it got a $3.9 million grant from coming through Chicago Metropolitan Agency for Planning’s Congestion Mitigation and Air Quality Improvement grant program, as well as additional funding through the Illinois Transportation Enhancement Program grant. The project broke ground on May 16, 2017. At the time, Romeoville mayor John Noak said he was excited to see some progress. 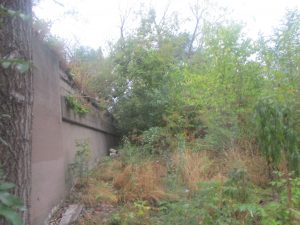 “Having another transportation link to the city will be a great benefit for residents as well as businesses,” he said.

Since then, the state has passed a budget. But, as Gillis explained, didn’t include funding for Auburn Park station.

“There was $15 million included in the recently approved state budget for Peterson-Ridge, but we do not know when that money may be made available to us, so we have no timeline to proceed,” he said. “There was no money included for Auburn Park and it remains on hold indefinitely.”

In fact, Peterson-Ridge station is the only project that got any kind of traction.

“Other than the money for Peterson Ridge, there was no capital money included in the budget, and the state has not approved a new state bond program,” Gillis said.

Kienzler told the Chronicle that she had no idea for the reasons behind the delay, and that she didn’t know when the money will be released, either. Dan Luna, Osterman’s current Chief of Staff, said that, to the best of his knowledge, Metra has been meeting with Illinois Department of Commerce and Economic Opportunity to figure out a way to move the project along, but nothing has come of it.

Nelson said that he hasn’t heard much, either.

“There’s been little communication on the state side,” he said. “I’ve spoken with State Senator Jacqueline Collins, and she’s doing what she can do to push it.”

Nelson said that GAGDC has been doing what it can to at least finish some parts of the surrounding development and do what it could to help get the project off the ground. The Healthy Lifestyle building is scheduled to open in December 2018. GAGDC has been buying some of the properties around the site. The Chicago Department of Transportation has been acquiring land for the project as well.

The only thing that keeps the project from becoming a reality, Nelson said, is the State of Illinois.

“Without the capital at state level, the train is just sitting on the track,” he said. “Until the state gets off its ass, this train is going to sit on the tracks, idling, if you will.”