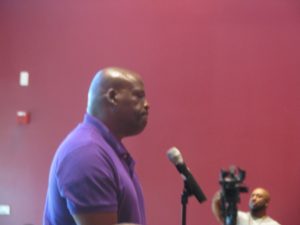 Reginald Knight closes his eyes during emotional testimony at a U.S. Department of Justice forum about the death of his 26-year-old son at the hands of Chicago police. (Photo by Kevin Beese/for Chronicle Media)

Reginald Knight, whose son was killed at the hands of Chicago police eight years ago, is not proud that his first reaction to the officers’ being slain in Dallas was a negative one.

“When I heard about Dallas, I jumped up to cheer,” Knight admits, “but as I was standing there it hit me how broken times will be for those fathers.”

Knight’s son, also named Reginald, was shot June 15, 2008 on the 300 block of West 109th Place. Knight said witnesses told him his son had his hands on a fence talking to an officer in front of him when another officer emptied eight rounds of ammunition in his back.

“As they were standing over his body, they gave high-fives to each other,” Knight said last week at a U.S. Justice Department forum on Chicago police practices.

Chicago police state that the younger Knight, 26, a resident of the 10800 block of South Parnell, was shot multiple times after he confronted officers with a gun.

The Independent Police Review Authority said that a gun was found at the scene.

The senior Knight said fighting police misconduct has become his life’s mission. He noted that a man has two important times in the world — when he is born and when he finds out why he was put on this earth.

“I’ve had over 60 years on God’s earth and this is it,” he said of fighting police misconduct. “This is why I am here.”

Knight said his crusade against police misconduct has helped him find purpose in the eight years since his son’s death.

“I’ve found something I need to heal,” Knight said. “My heart has been broken.”

He said the brokenness that the fathers of the slain Dallas police officers are feeling is commonplace for fathers in Chicago’s black community.

“Too many fathers are losing sons here to gun violence,” Knight said.

He said that the Chicago Police Department’s roundtable discussions held after a police shooting are just an exercise in getting the story straight before the case moves into the legal process.

“They sit there and come up with a story,” Knight said. “They are definitely told what not to say.”

According to Knight, for eight years he has been getting the runaround from Chicago police about what happened on the night of June 15, 2008.

Knight, who is black and has worked in law enforcement, said black officers wind up getting lost between two worlds.

“We are too black to be blue and too blue to be black,” Knight said. “They don’t trust me in the black community.”

Knight said he was appalled that new Chicago police Superintendent Eddie Johnson told reporters that he has never witnessed police wrongdoing firsthand during his 27 years on the job.

“We have an ass of a superintendent,” Knight said. “He either had his head so far up his ass that he couldn’t see or he’s a convincing liar.”

He said black youths who avoid becoming gang members wind up with two enemies — the gangs and the police.

“Our children, our fathers and our sons are being murdered by these guys,” Knight said.