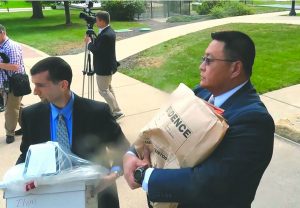 Unidentified FBI agents carried material out of a Senate office on Sept. 24, including a bag marked “evidence” and what appeared to be a laptop computer. The agents were searching the office of Sen. Martin Sandoval (D-Chicago) at the Capitol in Springfield. (Photo by Peter Hancock/Capitol News Illinois)

John Althen, a spokesman in the FBI’s Chicago field offic, confirmed that agents were present in the building but provided no additional details.

“They are engaged in an authorized law enforcement activity. Beyond that we have no further comment,” he said.

The first-floor suite contains the offices of several senators, but it was apparent the agents were focusing on the office of Sandoval, who is the Democratic Caucus whip. Through the translucent windows, reporters outside could see people moving inside that office, with occasional camera flashes visible inside.

Attempts to reach Sandoval’s district office by phone were unsuccessful, but several Chicago area media outlets reported that Sandoval’s Cicero offices and his Chicago home were also being searched Sept. 24.

A spokesman for Senate President John Cullerton (D-Chicago) said in an email that he had no information to offer.

Sandoval has served in the General Assembly since 2003. He serves as chairman of the Senate Transportation Committee as well as a subcommittee that was instrumental in crafting the 2019 capital bill, known as “Rebuild Illinois.” He also chairs the Special Committee on Supplier Diversity.

The raid was the latest in a series of searches and indictments involving high-profile Chicago Democrats and their close associates. But it remains unclear whether the search of the Senate office was connected to those other events.

In January, Chicago City Alderman Ed Burke was indicted on 14 counts of corruption for allegedly soliciting legal business for his law firm in exchange for allowing certain development projects to go through.

And in early August, federal prosecutors indicted state Sen. Tom Cullerton, a Villa Park Democrat, on embezzlement charges of allegedly receiving a salary and benefits from a labor union for which he did little or no work. A status hearing for Cullerton is scheduled for Oct. 29.