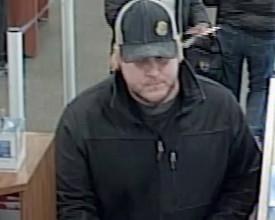 Video surveillance of the individual who robbed PNC Bank in Elgin on Monday (March 5).

The FBI is seeking information in connection with two Chicago area bank robberies.

Agents with the Federal Bureau of Investigation said someone robbed the TCF Bank at 2501 W. Schaumburg Road, Schaumburg, at 10:22 a.m. Tuesday (March 6).

The robber was described as a white man in his mid 40s, between 5’8” and 5’10”, between 170 and 180 pounds, and wearing a gray urban camouflage hooded sweatshirt and a dark-colored beanie cap.

The offender in that heist was described as a white man in his mid 20s, 5’6”, with a medium build, blond hair and light complexion, and wearing a brown-and-tan hat, a black coat and dark pants. 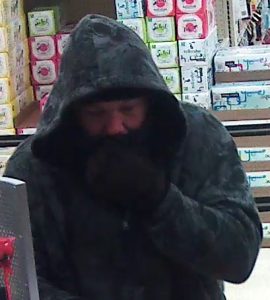 Video surveillance of the individual who robbed TCF Bank in Schaumburg on Tuesday (March 6).

The FBI is offering a reward of up to $1,000 for information leading directly to the arrest of either offender.

Both men should be considered armed and dangerous, FBI agents said.

Anyone with information regarding either robbery should contact the FBI’s Chicago Field Office at (312) 421-6700. Tips can also be submitted at tips.fbi.gov.