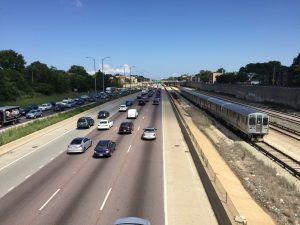 The I-290 expansion will widen the highway by expanding into the easement to the north of the CTA’s Blue Line. (Chronicle Media)

On a summer night in 2015, a female pedestrian’s leg was severed below the knee by a semi truck driver trying to navigate the tight Harlem Avenue exit ramp onto the I-290 Eisenhower Expressway westbound.

The truck’s passenger-side cab wheels rolled up onto the sidewalk, trapping the woman. The Illinois Department of Transportation wants to replace the dangerous 90-degree turns on the Harlem and Austin Boulevard exit ramps as part of their multi-decade project to redesign and widen I-290.

IDOT announced Friday that the Federal Highway Administration approved a final environmental impact statement and issued a “record of decision,” that will allow IDOT to move to construction drawings and specifications. The IDOT announcement did not say how project will come up with an estimated $2.7 billion in funding — either from the state or the federal government. The infrastructure upgrade may be partly privately financed, as described during the campaign of President Donald Trump.

IDOT says the “Ike,” built in the 1950-60s is one of the worst highways in the country, getting an “F” grade because of slow-crawling traffic jams, dangerous merging traffic and crumbling bridges. IDOT’s plan will widen bottlenecks and replace bridges and ramps between Racine Avenue in Chicago and Mannheim Road. The inner lanes will have optional “managed tolling” for drivers who wish to pay more for speed.

Rebuilding the 65-year-old expressway will strengthen the state’s position as the “transportation hub of North America,” said Randy Blankenhorn, Illinois transportation secretary. “This project will improve safety and mobility throughout the region while creating economic opportunity for generations to come,” he said in a statement.

The project started in 2009, and IDOT has held 150 local meetings with stakeholders, they said. Responding to public input, the project designers included new links to the suburban Pace bus system and the Chicago Transit Authority Blue Line as well as pedestrian and bike trails. Blankenhorn said adding links to public transportation would “better connect communities and create a true multimodal corridor.”

But designing safer, right-side exits without the traditional cloverleaf configuration has been a challenge.

At least three Oak Park village presidents and many transportation activists have demanded that the expressway “stays in the trench” during construction, so the highway expansion doesn’t gobble up parks or private land. To widen the highway, IDOT’s current plan will expand into the northern edge of the Blue Line’s CTA property. 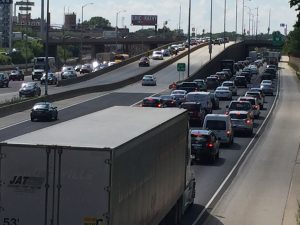 The left-exit I-290 ramp has a sub-optimal dangerous sharp turn onto Harlem Ave. (Chronicle Media)

“We had a whole number of positive impacts,” said Rick Kuner, founder of Citizens for Appropriate Transportation and former Oak Park trustee. “Did [IDOT] do everything we wanted? No. They gave lip service to some things, but made some changes we wanted.”

IDOT and CTA are working together to coordinate construction schedules with much-needed improvements to the Blue Line, including new stations and a brand new terminal in Forest Park. CTA also is unsure about the timing of funding and whether the two agencies will be able to work together.

Blankenhorn suggested that the I-290 project could be financed through a public-private partnership or P3. This new financing method, used with moderate success in other states, is proposed for the first time in Illinois for the I-55 managed lane project.

“The implication is that the private sector is so much more efficient that they can build at less cost and still make a profit, unlike public sector,” Kuner observed.

The I-55 P3 project has been crippled by the Illinois budget stalemate. In exchange for toll revenue, IDOT has wanted to outsource to private construction companies and financiers elements of the I-55 expansion. IDOT requested, and received, proposals to design, build and maintain the proposed expanded roadway. But the project cannot proceed without a General Assembly joint resolution.

IDOT’s exciting news was dampened by uncooperative lawmakers in Springfield. Inaction has delayed the scheduling of the I-55 project, Blankenthorn said. And to keep the highway system from becoming a complete traffic jam, IDOT wants to finish all construction on I-55 before starting I-290.

“Because of the lack of funding, no timeline has been established for either the I-55 or I-290 improvements,” he said.