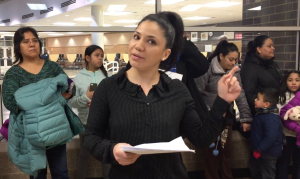 Activists from community group Ixchel Feb. 5 released a redacted document from the feds stating that the district’s English Language Learner (ELL) program would be investigated for discrimination against Hispanic students “on the basis of national origin.”

“The racial inequities with communities of color keep students from reaching their educational attainment,” said  Ixchel founder, Delia Barajas, who sent her six children through Cicero Public Schools. Ixchel filed a complaint with the U.S. Dept. of Education last July.

Sandra Davila, a former first-grade teacher at D99, described a program that she said was disorganized and demeaning to English Language Learners and their parents. Davila said her supervisors were a month late to give her curriculum materials. Those materials were designed for a dual-language program, she said, and she had been hired for a “transitional English” program.

“Children are not receiving quality education at the end. Teachers are scrambling around trying to figure out the objective for the program.”

Davila said she witnessed the principal telling a parent her child would not speak English if she didn’t.

“So disrespectful,” she said. She also said her children’s English accents were mocked by an administrator observing her classroom.

“What I see is a lack of respect for our bilingual and bicultural population,” Davila wrote in a resignation letter, shared with the Chronicle.

“Parents are tired and not seeing any progress. They are scared and afraid of retribution,” she said.

The Cicero School District has around 12,500 students, about half of them ELL students, according to the Illinois Report Card.  Most recent state test scores show only 5 percent of ELL students at D99 met the state standards to be “ready for the next level” and zero students exceeded the standards. The district’s budget is around $120 million a year. Around $5 million is designated for ELL education.

Cicero D99 Superintendent Rudy Hernandez declined to respond to emails and phone calls for comment. Eight parents at the school board meeting said they received no notification that the school district was undergoing a federal investigation.

The district has a history of allegations of discrimination and low performance for English language learning students. In 1996, the Dept. of Ed. Office of Civil Rights investigated the district for similar claims. After a three-year investigation, the OCR and the district issued a “voluntary action plan” that included self-assessment of programs, keeping track of students progress in transitioning to English speaking classes, and communication with parents.

In 2013, the Illinois State Board of Education audited the district, triggered by low test scores for English Language students. ISBE found that the district as failing to adequately track student progress in English after transitioning out of ELL. The audit found there were inadequate books and resources in Spanish for students.

In 2016, researchers from United Way and Loyola University noted that English language learners were not succeeding in D99.

“Across all academic indicators, students who have limited English proficiency are performing well below expectation,” said the authors of the Cicero Neighborhood Network Community Needs Assessment. The CNN team interviewed more than 1,000 parents, teachers and other stakeholders. As they grew older, D99 students who did not perform well in English were more likely to drop out of high school, with only 50 percent graduating, the report said. The report said D99 parents felt they didn’t have good communication with their schools.

“Given the tensions among parents, students, and administrators about the inclusion of parents in decision-making, concerns about the school personnel’s transparency in decision-making, and revelations about the imbalance in supports for students who have academic difficulties vs. those students who are high-performing; there is a need to enhance the communication and relationships among parents, educators, and community service providers in Cicero.”

It’s not just the students who have alleged discrimination in D99. Two administrators of Mexican origin — including the former ELL director — were awarded almost a total of $1 million in settlements last year after they sued the district in federal court alleging discrimination and retaliation. And more suits may be coming, the educators said.

Lawsuits claimed the ELL program was disorganized and rife with turf wars over administrative supervision. Former employees, in depositions, described boxes of unopened textbooks, faulty data submitted to the Illinois State Board of Education and battles to approve new curriculum materials.

The new Every Child Succeeds Act has spelled out how school districts will be accountable for spending Title I federal funds for low-income students. States will develop guidelines for evaluating school districts, except in the cases of English Language Learner and early childhood programs. Those will still be audited by the feds.

New U.S. Education Secretary Betsy DeVos has hinted that she will make changes in the reach of the department, and even that the Office of Civil Rights may be scrapped.

If that happens, activists said they would take complaints to the Equal Employment Opportunity Commission (EEOC). Bianca Vargas of the League of Latin American citizens (LULAC) said her group and others such as the Mexican American Legal Defense and Educational Fund (MALDEF) would not let the matter drop.

“LULAC and MALDEF and the national organizations are going to continue the work eagerly to make sure that this [discrimination] is not going to happen.”