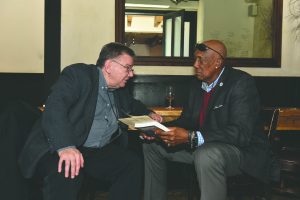 Author George Castle (left) and Hall of Famer Fergie Jenkins chat at a party for “Champions,” a book Castle wrote in 2018. “The 1969 Cubs,” written by Jenkins and Castle, is now on sale. (Photos courtesy of George Castle)

How does a team with four future Hall of Famers, a Hall of Fame manager, two 20-game winners and a 10-game lead in mid-August not win the World Series, let alone its division?

That is a question that has haunted members of the 1969 Chicago Cubs as well as their fan base for a half-century.

“We were all winners; we were all World Series worthy, no matter what the final results say in the record books,” Jenkins says at the conclusion of “The 1969 Cubs,” the book he penned with Castle.

A tired bunch of regulars, an underutilized bench, a manager “who felt withering pressure to win it all with the best team in the National League,” according to Jenkins, and a historic 37-11 finishing run from the New York Mets all contributed to the memorable conclusion that saw the Mets blow by the Cubs and win the division by eight games.

Jenkins said it was simply a different Cubs team down the stretch than the team that had built a double-digit lead by August.

“We were not the same later in the year,” Jenkins told the Chronicle, remembering that fateful year. “The Mets would not have caught us. Our demise was when we stopped scoring runs.”

He said he and fellow starters Ken Holtzman and Bill Hands, a 20-game winner in 1969 along with Jenkins, continued to have quality outings during the Mets’ phenomenal run, but the North Siders would lose 2-0, 3-2 or 1-0, Jenkins said.

While still frustrating 50 years later, Jenkins said he has come to grips with the 1969 season.

“We were beaten by a better ball club,” Jenkins said.

He said the regulars, including Hall of Famers Ernie Banks, Ron Santo and Billy Williams, were tired by season’s end, although no one ever wanted to come out of the line-up.

Jenkins, a Hall of Famer himself, compiling six consecutive 20-win seasons, said manager Leo Durocher, who was elected to the Hall of the Fame by the Veterans Committee in 1994, even came to him to save a game against the Cincinnati Reds on no rest that year.

Shortstop Don Kessinger said days off were not even a consideration.

“Would I like to have some days off? Answer is no. I wanted to win a pennant,” Kessinger states in the book.

“They hustled, they played hard,” Jim Colborn, a Cub rookie pitcher in 1969, states in the book. “This wasn’t a coasting-type team.”

Jenkins said the black cat running by Santo in the on-deck circle in that fateful two-game series at Shea Stadium in mid-September when the Mets wiped out the Cubs’ lead, has been misinterpreted over the years.

He said nobody took it as an ominous sign.

Author George Castle, a lifelong Cubs fan, was so confident of a Cubs’ 1969 postseason run that he said on his second day as a freshman at Mather High School to another student, “Me and a lot of other kids won’t be here in October.” When the student inquired as to why, Castle said, they would be “at the World Series in Wrigley Field.”

Castle said there have been a lot of books written about the 1969 Cubs. He wanted to make sure his effort with Jenkins was something special.

He said the 1969 team led the way to the Cubs being a regular draw on the North Side of Chicago.

The book by Jenkins and Castle can be purchased at www.amazon.com/1969-Cubs-Rememebered-Remembered-Forgottten/dp/0999529854.