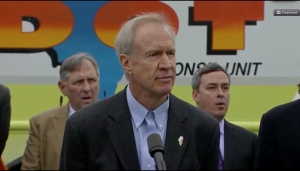 Gov. Bruce Rauner speaks at an IDOT garage in McCook to urge the General Assembly to approve proposals to privatize the I-55 expansion plan. (Blueroomstream

In a McCook garage, Rauner said the Illinois House was dragging its feet on approving a joint resolution approving the Illinois Department of Transportation’s I-55 proposed managed toll lanes project.

“This is one of the most important job-creating projects we can pursue as a state,” Rauner said.  “We need to create good-paying jobs for the people of Illinois. One of the best ways we can do this is to invest in our infrastructure to make sure we have the best highway system in America.”

The House has held five hearings on the I-55 project, but has not called it for a vote. The project would add two managed express toll lanes to a 25-mile stretch of the Stevenson Expressway between Chicago and the Will County line.

At issue is the method of financing the construction. The I-55 project is the first IDOT project proposed to be financed with Public-Private Partnership, or P3, funding. P3 funding was approved during the earlier Gov. Pat Quinn administration, but projects must get approval from the General Assembly.

Rauner said “taxpayers would not be at risk, even for one nickel” to construct the project, which would create construction jobs. “This can all be privately financed. This can all be done independent.”

The express toll lanes would be optional lanes that “guaranteed” a 45 mph traffic speed on the often-congested expressway. Toll pricing would fluctuate based on demand and usage, said Randy Blankenhorn, IDOT secretary.

But House Speaker Michael Madigan has complained about a “conflict of interest” with the Intersect Illinois Corp., supported by Rauner.

When asked about Madigan’s objections, Rauner said, “Have you ever read baloney before?”

Under the I-55 project’s P3 proposal, private companies would design, build, manage or maintain (or some combination of the four) the highway’s new express toll lanes, estimated to cost $425 million. It’s anticipated that the to-be-decided private partner would also collect tolls.

P3 highway projects have been completed in California, Texas, Colorado, Florida and several other states.

The project could be completed as early as 2020 if P3 financing were approved tomorrow, Blankenhorn said. Under normal “design, bid, build” projects, IDOT can take years just lining up federal funding and then finding contractors. Past IDOT presentations have estimated the same project could take up to eight years with traditional financing. In November, IDOT met with representatives of several finance and construction companies to request parameters of what the state could privatize.

Sen. Leader Jim Durkin (R-Western Springs) said his personal experience of “bumper to bumper” traffic on I-55 led him to introduce the resolution in the Senate.

Rauner said the project was one that supported businesses, created good construction jobs and had bipartisan support.

“We’re asking the Gen Assembly to move forward. Let’s get the resolution passed,” he said. “We stood here over a year ago, and said let’s go. We’ve got the contractors ready. Lets expand the economy. Let’s move forward,” Rauner said.