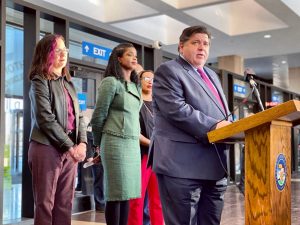 Gov. J.B. Pritzker speaks during a news conference Dec. 11 in Chicago about court filings by Cook County State’s Attorney Kimberly Foxx (second from left behind Pritzker) to vacate more than 1,000 low-level marijuana convictions. To the left of Foxx is Rep. Kelly Cassidy (R-Chicago), lead sponsor of the marijuana legalization bill that passed the General Assembly during the spring session and goes into effect Jan. 1. (@GovPritzker on Twitter photo)

“We are undoing the harm prosecutors have caused,” Foxx posted on Twitter Dec. 11. “Prosecuting these cases was not in the public interest, or in the interest of public safety.”

They were the first of what are expected to be many filings across the state to expunge potentially hundreds of thousands of criminal arrest and conviction records for marijuana-related offenses.

“A criminal record carries with it more than stigma. It prevents people from being considered for job opportunities, from getting a loan or a mortgage, from renting an apartment, from applying for financial aid for college, from getting a professional license and more,” Democratic Gov. J.B. Pritzker said during a news conference following the court hearing. “In sum, it can crush a person’s ability to live a full and dignified life.”

On June 25, Pritzker signed House Bill 1438, making Illinois the 11th state to fully legalize recreational marijuana, and the first to do so through a legislative process. Supporters have dubbed it “the most equity-centric” legalization law in the country because it specifically sets aside a portion of the tax revenue generated by legalization to reinvest in low-income and minority communities and other areas that experienced “high rates of arrest, conviction, and incarceration” for marijuana-related crimes.

Although recreational use of marijuana doesn’t become legal until Jan. 1, the new law also provides for automatic expungement of criminal records for possessing less than 30 grams, or roughly one ounce, of marijuana. In addition to wiping out records of court records, the law also calls on law enforcement agencies to delete records of arrests, even if those arrests did not result in charges.

That turned out to be one of the more controversial elements of the bill, and it was the subject of intense negotiations with Republicans who supported the concept of legalization but were wary of wholesale record expungements.

Supporters of expungement often pointed to statistics showing that marijuana usage rates are relatively even across racial and ethnic lines, although people of color are far more likely to be arrested and convicted for it.

Others, however, argued that low-level charges are frequently the result of plea bargaining with defendants suspected of being involved in higher-level offenses — plea deals that likely would not have occurred if low-level possession had been legal at the time.

House Republican Leader Jim Durkin, of Western Springs, is one who still has reservations about the new law.