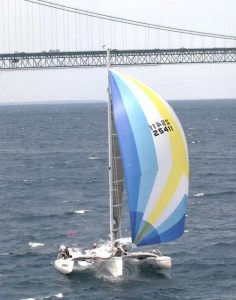 The U.S. Coast Guard rescued five people from the stormy waves of Lake Michigan in the early hours of Sunday, July 16 during the Chicago Yacht Club’s 109th race to Mackinac Island. One person fell overboard during the race and was rescued by “a good Samaritan” and four people were rescued near Fox Point, Wis., when their boat capsized. All the people rescued were in good health and did not require medical help, the Coast Guard said in a statement.

Sailors reported a shifting wind around midnight off the Wisconsin shores between 60-75 knots (35 mph). The strong winds knocked about one-third of the 300 teams out of the race.

The first rescue took place 40 miles east of Port Washington, Wis., around midnight, the Coast Guard said. A person fell overboard and was in the water for more than an hour. The Coast Guard credited a lifejacket and personal locator beacon for the safe retrieval of the sailor, who was pulled out of the water by a “good Samaritan” from another boat in the race.

Around 1 a.m., the Coast Guard received reports of three red flares 30 miles east of Fox Point, Wis. Other teams reported a boat had capsized and four people were on top of the overturned vessel’s hull. Boats standing by to help were Dark Horse, Abbie Normal, Tide the Knot and Timberwolf, according to the Chicago Yacht Club.

“All of the sudden it hit us with a blast that basically knocked the boat over,” Shneider said in a televised interview. “Pretty soon we’re in the water.”

Only two of the four people on the hull were wearing lifejackets, the Coast Guard said. They did have flares and a radio beacon.

“The Coast Guard strongly recommends boaters wear their lifejacket at all times while underway in case of unexpected weather conditions,” the Coast Guard statement said.

The sailors were rescued by the crew of the Coast Guard Cutter Biscayne Bay, an ice-breaking tug based in St. Ignace, Mich. An MH-65 helicopter crew based in Waukegan was diverted and also assisted. 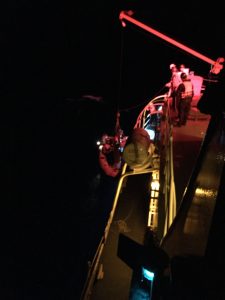 “The MH-65 helicopter hovered over the distressed vessel and provided assistance with their spotlight while a small boat from the Biscayne Bay rescued the four people and transferred them to the cutter,” the Coast Guard press release said.

“It was tough because it was blowing hard — probably 30 knots. And it was probably three-to-four foot waves already, and getting onto the Coast Guard little boat and on to the big cutter was not so easy,” Shneider said in the interview. “It was hard. But the Coast Guard guys are fantastic.”

The annual Chicago Yacht Club Race to Mackinac is a 330-mile amateur yacht race from Navy Pier in Chicago to Lake Huron. The race was started in 1898 and is reputed to be among the longest freshwater sailing courses in the world.

The “Mac” race is often hit with unexpected weather. Two sailors died in the 2011 race in 75 mph winds.